Life continues to be rich and full in the Miser Family.  Even though I didn't have any new papers accepted or anything like that, we still managed to have fun adventures.

My granddaughter and I both had birthdays this week; one of us aged out of her prime to become a perfect square, and the other one of us is now back into her prime.   (Geeky math joke, there).  We got to spend time together at the beginning of the week, making waffles, taking Prewash to the dog park, and taking pictures.  Happy birthday, kiddo!


On my birthday, I took my calculus class to the bagel shop, where my students learned how to do separation of variables to solve ordinary differential equations.   It was really fun class! 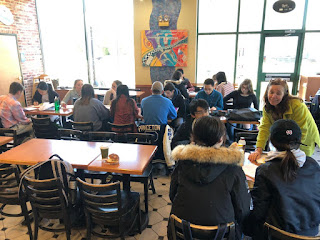 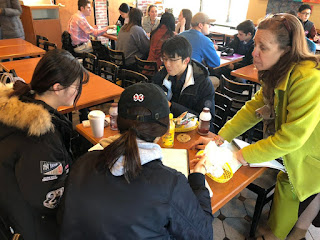 What else happened?  N-son tells me that he is enjoying his internship at the Ice Rink.  He got to meet the Country Singer/Songwriter Cole Swindell.  He also got to . . . wait for it . . . drive the zamboni!   Is that cool, or what?

J-son took the NOCTI tests this week, to see if he can get his certification in sports therapy.  We've all got our fingers crossed for him.  And in the opposite of therapy, K-daughter came down with Strep Throat.  Poor K-daughter!

Oh, yeah, and this other thing happened.  On Thursday, my husband threw his hospital staff into consternation by walking the one mile to the hospital (instead of having me drive him), where he got his old knee swapped out for a brand-spankin' new Titanium knee.


For what it's worth, the nurse who walked us through the post-op instructions said he's allowed to walk as much as he wants with his walker so he doesn't fall,  and he's not allowed to drive a car until the next nurse clears him to do so.  I noticed the nurse didn't say anything at all about bicycles.  Anybody want to put money down on the date of the first bike ride?

We're all delighted that the March weather really is going from lion to lamb; today we opened windows (one or two of which become Dog TV for Prewash) and let the balmy breezes fill the house.  We're glad to have a comfy house with lots of space on the first floor for people and dogs to wander and to slalom, baby.

And that's the news from our family, which continues to be wealthy in our adventures.  May you and yours be similarly prosperous.