Life continues to be rich and full in the Miser Family Household.  Here in our neck of the Miser-ville farm fields, the April showers are bringing April flowers.  It's good to see the daffodils burst out, fast upon the heels of the crocuses, elbowing for space with the violets. 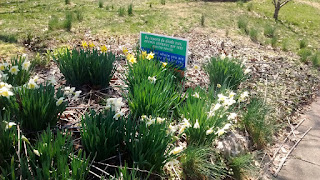 The week began with an amazingly snarfulously decorated birthday party (Dr. Seuss-themed).  If you ever wonder who provided the oomph of enthusiasm behind our family's themed special dinners, look no further than the oomphabulous K-daughter.  Check it out:

My own week filled up with a Calculus Exam (office hours beforehand, the exam itself, then grading, then consoling/counseling the students who didn't do as well as they'd have liked).  That's a week's worth of effort right there.  But I also learned --- and I think this is so cool -- to replace a screen in a screen window.  Here I am, more than a half-century old, and I've never done it before.  The salesperson at the hardware store told me it was easy to do, and so I did a quick you-tube search, and sure enough it *is* relatively easy!  Go figure!  So now I've replaced two screens that were busted by my kids, and once I buy a bit more screen I'll replace two screens that were busted by my dogs.

I also went to the grocery store this week.


This is what my guy looked like two Thursdays ago, in the hospital, right after he'd had his leg ripped open, his bones sawed apart, a new titanium knee hammered into place, and his flesh stapled back together.  His bike buddy came by and took this photo of my guy in this darling off-the-shoulder gown.

Now, a week-ish later my husband looks somewhat different.  He's wearing a bathrobe instead of a hospital gown, for one thing.  For another, now that the bruises are spreading, his leg looks like the handiwork of a drunk-yet-enthusiastic tattoo artist with a penchant for modern art.   And finally, he's not quite so smiley.

His leg is still fairly swollen, which in turn means his flexibility is behind where the PT guy would like it to be.  He's also having trouble sleeping at night.   That's the bad news.  The good news is that the long-term prognosis is good.  (When my husband begged the nurses to admit him to a rehab center to get round-the-clock care, they told him he's in much too good shape for that).  The PT guy showed me how to help with stretching exercises (so I'm allowed to pull my husband's leg!).  We're grateful for ice packs and for pharmacies.

My sons haven't given me any exciting updates, so I assume they're doing fine.  Prewash the Dog is celebrating the warm weather by decorating the house in dog hair.  I'm trying to get her to promise not to put her feet through the new screen windows, once I get those fixed.

And that's the news from our family, which continues to be wealthy in our adventures.  May you and yours be similarly prosperous.
Posted by Miser Mom at 5:23 PM