Well, life certainly continues to be rich and full in the Miser Family Household! 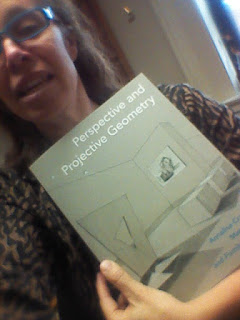 If there is such a thing an edge of the world to fall off of, I haven't fallen off of it.  No, the reason I've been slow at writing updates is because I've had more than my share of exciting committee work at my college.  My dad used to have a desk with a bunch of pigeon holes, and used to say he should never have more committees than pigeon holes to file the papers into.  (That's the example that I still think of, when other mathematicians mention the Pigeon Hole Principle, a famous postulate in mathematics).  Well, I have too many pigeons and not enough holes this semester!

Nonetheless, in spite of all my running frantically from committee meeting to classroom, I've had some good times professionally.  Par exemple:  my book.  It exists!  I've held copies of it in my own hands!  Yay!

My family members also have had exciting lives, also (some of them) perhaps a tad more exciting than they'd hoped.   N-son left school much sooner than he or others expected he would.  With my husband's help, he's making new plans for the future, with the future still being about 5 weeks away due to family travels.  In the meanwhile, he's very much enjoying spending time with his oldest, most fiercely loyal sister, L-daughter, down in Virginia.  It's so good that they can be together right now.   J-son, to make things kind of parallel, left his job much sooner than he or others expected he would. He's decided to strike out and live on his own, and we are all crossing our fingers and toes, hoping that works out well for him.   And K-daughter has been discovering firsthand just how much harder it is to get a divorce than to get married.

To complement the exciting lives we've been leading, we celebrated earlier this month with a family SuperHero dinner. 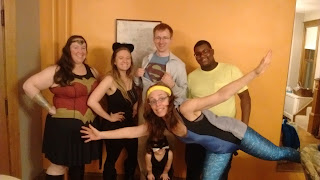 Do you see the pair of Super Cats?  (One is tinier than the other). 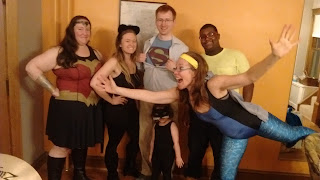 I-daughter (dressed as Wonder Woman above) is leading a relatively hum-drum life compared to the rest of us right now.  Knitting is good.  Singing is good.  She is happy to be the stable one in all this.

And what about my husband, you ask?  His knee has gotten so much better since his replacement surgery last March that, earlier this month, he kept up with a Lamborghini while on his bike.  Admittedly, the Lamborghini was toodling down our quiet little street (the street is bespeckled with stop signs).  Nonetheless, his bike kept up with the Lamborghini.  And so, in keeping with the excitement theme, he decided to head over to Israel for five weeks.  Since he's the one in charge of his itinerary, it's a highly eclectic one:  he started his trip in the part of Israel called "Paris", and he's now in the part of Israel called "Belgium".  No doubt he'll either get to Israel proper eventually, or change his mind yet again and ride his bike across Russia.  We'll see.

Prewash had her own excitement, coming down with a very bad ear infection.  We got to visit a new vet, whose office is literally right around the corner from our new house, and we got some antibiotic that cured the problem quickly.  Here is a Q&A with Prewash.


Interviewer:  Prewash, do you like having someone stick an applicator into your ear canal to squirt antibiotic down there twice a day for two weeks?

And that's the news from our family, which continues to be wealthy in our adventures.  May you and yours be similarly prosperous.
Posted by Miser Mom at 4:56 PM No comments: