card table repair, in spite of my head

It's an interesting place to visit, my head is, but not everyone would want to live there.  Who really wants to feel existential angst over card table repairs?

The card table in question is one we've had for a quarter of a century or more.  It's not surprising that it looks a little bedraggled, especially considering the hard use my very active kids have given it.  In fact, what's probably most surprising is that the wear is confined to a few rips in the vinyl. 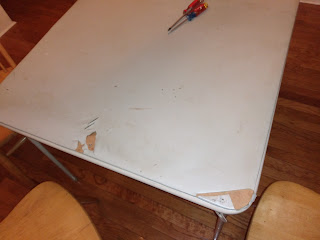 Now, N-son needs a kitchen table at his new apartment.  A card table would be most excellent, because we really have no idea how long he'll be living there, and we're trying to make sure most of his furniture is the kind that is easy to move -- wire shelving, for example.  Or, y'know, a beloved card table.  So I'm hoping to foist this off on N-son as a way of pretending to be an incredibly generous mom.

On the other hand, the rips expose the porous cardboard/wood underneath, which invites much more serious water-based damage.  So I decided to re-cover the table.  It's a really simple repair, actually.  Just turn the table over, unscrew the table top from the metal frame,. . . 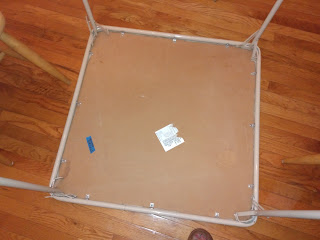 . . . and then stretch the new vinyl across the table top.   I didn't even bother to remove the old vinyl. 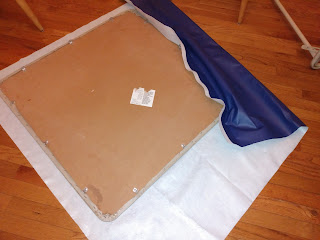 Screwing the table frame back onto the table (and making sure the screws pass through the vinyl) is enough to keep the vinyl taut and in place.  I like how the blue just pops.  Together with the red chairs we snagged for him, this'll be almost a super-hero-color combination for his apartment kitchen.

So what's the existential anguish?  At the same time that I'm thrilled at
(a) finding a way to get a card table I no longer need out of my home and
(b) into the home of someone who can use it;
(c) saving a table from the landfill;
(d) repairing (because, fun);
(e) not paying big bucks for a table . . .

. . . at the same time as all that, I writhe because I bought new vinyl.   Surely, part of my head tells me, you could have found a used table somewhere for less than the $9 that vinyl cost you.   And of course my head says, that vinyl is yet another addition to the plastic monster taking over our world.

And so, I am happy to have repaired a table and even made it more beautiful than before, and I simultaneously fret about how I might have been yet a better steward of my planet's finite resources.

I should say that this is not a turmoil that keeps me awake at night or disrupts my life.  I kind of like it, in fact, that my head wants me to be a better problem solver, because there are times my head convinces me to do some pretty awesome and clever things.

But the card table, it wasn't awesome or clever. It was okay.  And I'm going to gift this okay table to my son, and pretend to be incredibly generous.  And my son can have a super-hero kitchen, while being glad he doesn't have to live in my head.

Life continues to be rich and full in the Miser Family household, with this week being one particularly piled high with pockets of delight.   And really, any week that begins with the crocuses peeping up out of the ground, and ends up with the crocuses in full bloom -- well, that's gotta be a good week, right?

I've had a particularly active week, giving talks (to mathematicians, of course, but also to music educators because . . . um, because they asked me?), and driving students to math talks, and attending talks about protest art, and hosting a Zero Waste meeting.   At the Zero Waste group, we talked about the role that gratitude and generosity have in a low-trash kind of a lifestyle, and we read a particularly poignant essay on gratitude.   And I really do have a lot to be grateful for; it's so good to remember that publicly.

My husband continues to zip around the world, while simultaneously filling in gaps in my geography knowledge.  (My gaps are vast, by the way).  He started the week in Jerusalem, and from there went to Ramallah.  I had to ask where that is, and he said: good question.  It's either Israel or the occupied territories, depending on who is answering.  His T-mobile plan usually announces the name of any new country he enters; he said that when he went to Ramallah, his phone chirped, "Welcome to Abroad."   Way to be neutral on a controversial topic!

He is currently in Tbilisi -- I had to ask where that is, too:  Georgia.   That's less controversial, although that country has a past that includes Russian and Persian rule.   But apparently, Tbilisi has wonderful hills for bicycling up and down on, so what was first intended to be a brief stopover for my husband has turned into a city where he'll stay for a while, zooming up and down the ridges that rise from the Mt'k'vari River, and wrecking his knees but good.   That's the life, man.

K-daughter and her clan have likewise had an exciting week:  they paid off her student loan debt, bought a house (going into a new kind of debt), and then moved!  I haven't seen the new place yet; I just exchanged lots of text messages full of exclamation points.

More text messaging happened with me and I-daughter, and then I got an in-person visit from I-daughter for no particular reason, just because.  It's been sooooooo long since I visited with someone "just because".  I think I have to put that on my to-do list, because it was a lovely thing to just hang around and chat and watch videos of N-son and L-daughter doing the oh Nanana challenge.

Speaking of N-son, he's still having fun down at L-daughter's house.  I got to chat with him today to tell him about shelves I'd bought for his apartment up here.  By a happy coincidence their godfather, who used to live here in the city where both of them grew up, became a pastor and moved down to Virginia to the very city where L-daughter lives now.  N-son said that at church today, Stanley preached a sermon that really spoke to him on locating joy: do we find it in ourselves?  Do we share it with others?

And that brings us back to where we started.  Maybe we locate joy in crocuses, or in bicycles, or math talks, or owning houses, or just-because visits, or dancing . . . but maybe it's just even more joyful to be surrounded by such a wonderful reminders that this world is full of treasure beyond treasure.    And that's the news from our family, which continues to be wealthy in our adventures.  May you and yours be similarly prosperous.

Texting with my daughter one evening

*footnote:  a paragraph from the Raptitude blog, for context on why I kept writing about socks:


"I’d do this [negative visualization] on a smaller scale too, such as imagining my socks disappearing, just long enough to feel my clammy bare feet against the damp insoles of my boots. A moment later, I’d drop the fantasy, and discover anew just how much comfort a cheap pair of sport socks was adding to my life in that moment."