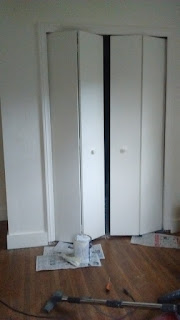 Here's a minor project I've tackled over these past few weeks, in between the every-thing-else-that's-going-on of my life.  Ahhh, this picture makes me so happy.

And yes, it's a picture of some very plain looking bifold doors.  That's my project.

Our home is rich in bifold doors.  The previous owner installed them in closets, in both entrances to the kitchen, and even on some of the bedroom doors.

Bifold doors have some nice advantages, like they don't swing out as far into hallways, and like you can easily take them off if you need to get back into the closet to clean it out.  (I got to astound my daughter when she was cleaning out her dad's pantry by removing the pantry door so she could get at the shelves more easily.  Mama does magic tricks!)

But bifold doors can also be a pain in the tuckus.  They make lousy bedroom doors, because you can't lock them.  And the same feature that makes them relatively easy to remove on purpose makes them relatively easy to remove by accident, especially if they are in a room where a pair of highly active, ADHD teenager brothers wrassle each other constantly.   Oh, those boys.

Of course, it wasn't just them.  Our former dog, Miser Dog, was afraid of rain and thunder, and whenever a storm would blow in, he'd climb into our bedroom closet; sometimes he'd shiver so hard he'd knock the door down.   But Miser Dog fortunately didn't damage the doors; we'd just wait for the rain to stop, and slide the door back into place.

At any rate, this particular pair of doors in the photo have been through a lot.  One daughter painted them with decorations that glow under ultraviolet light.  Then the boys wrassled and broke the hardware on the doors.  One of the two boys went through a terrible phase in which we had to remove all doors and drawers and other hiding places from his room for several months (oh, lord, was that awful!).   Between the removal, the ultraviolet paint, and the broken hardware, we hadn't gotten around to replacing them, so the closet just was open all the time. 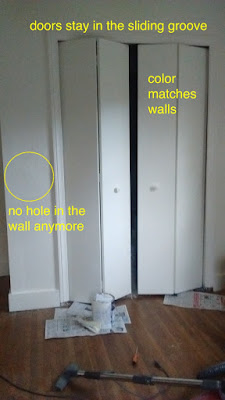 In the meanwhile, we'd hired some pros to come do things I can't do myself -- repair the roof; take down bifold bedroom doors and install real doors (with knobs and locks and such), fix warped ceilings. So by the time I was done painting the walls in my boys' former bedroom, I happened to have a mini-lumberyard of materials.

The former bifold doors, I sanded and then painted. The blue doors with neon-orange and hot-pink highlights are now ivory white. I scavenged hardware pieces from the former bedroom doors, and fixed the broken bits on the closet doors. I had to move one track down a bit (yay for a scrounged piece of lath hanging out in the garage), but then I installed the doors and . . . voila!

In the grand scheme of things, this isn't a big deal. But you have NO IDEA how much better this looks. Seriously, paint is freakin' amazing. Well, and plaster for fixing holes. And sandpaper for smoothing plaster. But, . . . paint! Doors!