I seem to have inherited my children's jeans . . .

Okay, so the title of this post is funnier if you hear it, instead of reading it.

But I love getting to this stage where I inherit my children's clothes, when I get "hand-me-ups" instead of them getting "hand-me-downs".  When my oldest daughters finally became teenagers, I gladly co-opted the jeans they no longer wanted, and as a result ended up wearing designer labels in spite of my usual generic preferences.  Several of my off-spring have been particularly fashion-aware, and as a result I managed to snag some fairly stylin' sets of clothes in the years before they headed off to college.  I've always particularly appreciated getting a new (to me) pair of jeans, since I tend to wear those into rags myself.

In fact, I like denim jeans so much, they've been one of the few exceptions to my "people-colored clothing" wardrobe rule.   Blue jeans are just about the only clothes I wear that don't explicitly match my gold-and-brown scarf, and so they're just about the only non-earth-tone items of clothing in my drawers.  If I could find some nice brown jeans for cheap, I might get those, but since I haven't had any luck with finding earth-tone jeans, I keep a pair of blue jeans for slumming and for construction projects. 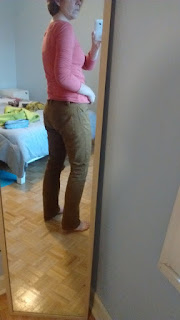 There on the top of the "donate" pile, I discovered that J-son had tossed a pair of brown jeans that he no longer liked.  Because I was still in my broken-arm-sweat-pants-only phase, I had to ogle the pants from afar.  Would they fit me?  Could I eventually button them?  Would these jeans cross the gender/age boundary and still look as decent on a 50-year old mother-of-six as they'd looked on an 18-year old lad?  One of the triumphs of getting my arm out of the splint is that I could finally try on the pants and discover . . . yes! Cinnamon jeans!


In other happy clothing acquisition news, my oldest step-daughter, who--like J-son--cares very much about what's hot and what's not, decided for the second year in a row that my Christmas present would be to use me as a proxy for Goodwill or Salvation Army.  She off-loaded all her discarded clothes on me, allowing me to sort through to keep what I might like, funneling the rest to whatever thrift shop I cared to choose.  Most of the clothes were the wrong color for me, but there were a couple of white sweaters that I rotated into my collection, conveniently replacing other white sweaters that were not only marginally more dated, but also stained.  (Oh, white cotton.) 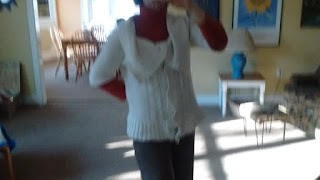 I think I'm just especially tickled by the trust that's built up here in a gift like this.  My step-daughter doesn't feel like she has to try to impress me by buying shiny new stuff for me.  She doesn't worry that I'm going to judge her past clothing preferences.   And she's perfectly fine with me deciding that half or more of her "gifts" to me aren't something I want to keep.  Indeed, she knows me well enough to know that I'm just totally tickled to be part of a process of keeping a few clothes from hitting the thrift-store-to-landfill escalator for a little while longer.

That gift of trust is even more flattering to me than the gift of white sweaters.

(Still, here's hoping that next year, she develops a fondness for earth-colored denim.)
Posted by Miser Mom at 5:34 PM