Saturday, the blizzard howled around our home while we watched Blacklist and Madame Secretary.

Overnight, the clouds parted and the nearly full moon shone down, making everything shine.

Early Sunday morning, I woke up with the sun and shoveled a path down the driveway to the street.  We have a garage out back, where our car gets to sit safely sheltered from the storm.  So the front driveway, I cleared just enough for pedestrian traffic.

The boys, I woke them just before 8 and sent them out to shovel -- not only a walkway for our home, but also driveways of three of our neighbors.  These neighbors, they paid the boys big bucks.  There's no business like snow business!
It's true there was a lot of snow for the boys to clear.  A lot.  The boys, they didn't finish shoveling until 3:30.  Aches and pains.   Some cold feet. 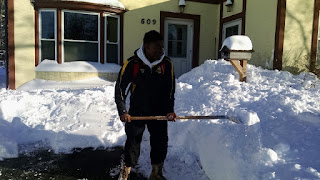 Not to mention, sore backs from throwing snow onto higher and higher mounds of snow business. 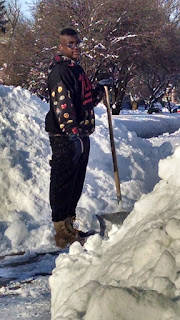 While the boys made piles of money busting their backs shoveling other people's snow, I got to sit back and be all "yay, me" while I enjoyed the fruits of frugality.   To wit, 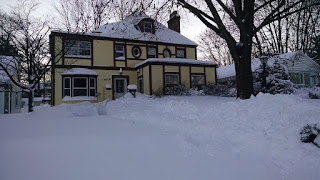 Okay, maybe it was a big gift of gratitude, three feet deep and fairly chilly.  But what a lot of fun!