If there's one area of personal finance where my husband and I disagree the most, it's phones. Me, I just about hate 'em.  When I was in college (that was back in the days when, if you wanted to talk on the phone, you had to stand next to the wall), I spent about 33¢ per month on long-distance calls.  But my husband, he got one of the first ever cell phones, back when these were called "car phones" and they came with a 5-pound battery pack that you had to lug along using a shoulder strap because the thing was so danged heavy.

So it's not surprising that my family has had pretty hefty phone bills AND that I continually try to find ways to bring those bills down from what I see as the stratosphere.

Just FYI, because of all our various kids, we've maintained about five different active cell phones for over a decade now.  For the most recent years that I've been keeping records, our average monthly cell phone bills have been

In other words, in the last four years alone, we've spent over $13,000 on cell phone bills.  To me, that's crazy.  To my husband, it's been a life-sustaining, vital expense.

Last summer, I wrote about how my husband finally decided to give up his old, reliable Verizon plan and switch to Ting.  Based on other bloggers' glowing reports, I was all excited to show him that frugal phone plans work, too.  (Yeah!  Goooooo, Miser Mom!)  But unfortunately, the switch was a little black hole of a disaster.  We just don't get Sprint service here at all (necessary for Ting), and the "bucket" approach to data turned out to be a "bathtub" of data for my guy.  All of a sudden we were paying boatloads of money for lousy reception -- the worst of both our worlds.

Fortunately for me, a bunch of different people commented with great suggestions.  The jackpot, as far as my husband was concerned, was the comment that came from Penn, who wrote:

Verizon has now ditched contracts. So, if he still has a Verizon phone, you can actually do a "bring your own device." There's a variety of data plans. My husband and I share 1 gig a month (we monitor near the end but have been fine). We pay $20 each line for line access.
No worries about extended contracts, and his bill should be under $75 unless he uses a LOT of data. . . .

So, he moved back to Verizon.  He doesn't swing $20 bucks for his line, but he does, as predicted, keep the cost under $75 -- just about $65, in fact.   (Although he's had one or two months where he had to institute a data-diet toward the end of the month to keep the bill that "low").

As for the rest of us, the boys and I share four lines.  (There are only three of us, but we've learned though repeated losings of phones on the part of the boys that it's just less headache having a back-up phone at home, especially now that we've ditched our land line).  And the cost for our four lines, using Republic Wireless? $53/month. 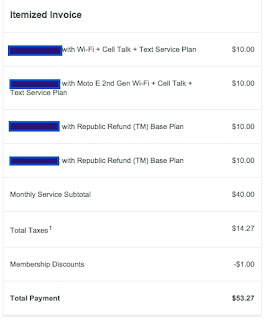 So that's how we managed to bring the average cell phone bill down in 2015, and it looks like we'll be able to point to
My husband, he's happy with his current phone, so that's good.  And as for me, I look at that phone bill and I know it's not 33¢, but it's definitely heading in the Miser Mom direction . . . so I'll take what I can get.  Thanks one and all for your good advice last August!