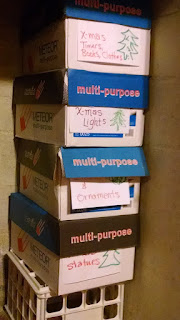 My little paper box collection (okay, my big paper box collection) started off several years ago as a throw-my-arms-around-and-thrash-a-bit attempt to find a storage method suitable for my sons:  easy access, cheap to replace after the inevitable destruction, non-toxic to our environment.  By trimming down one edge, I make a box that has good visibility but still has lots of space for stuff.

I'd tried a bunch of other alternatives of course, but they were only successful in the sense that they could tide me over until the next attempt.  But . . . cardboard printer boxes . . . wow.  They're just so handy.  And now I use them all over the house, storing everything from lightbulbs to bike gear to donate-able clothes.

Which is why, this year, instead of putting my Christmas decorations back away in the plastic fake-milk-crates I'd used for years, this year I switched to printer boxes.  (As the lids, say, they're "multi-purpose").  The only milk crate left is there because it keeps the boxes off the floor-- we occasionally get water in the basement -- and now that I think about it, I'll probably just switch that to a pair of 2-by-fours.

The fake-milk-crates, they're headed for the thrift store.  I'm sure someone can use them, and as Bea J. of the Zero Waste Home says, I don't want to hoard things that could be put to use elsewhere in the world.  I know other people don't love printer boxes the way I do, but they might use plastic crates.  Time for a material rearrangement of the universe . . . or at least a material rearrangement of the city I live in. 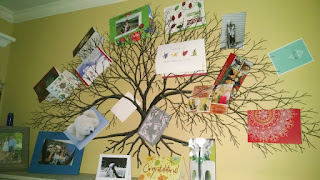 And so, with the ornaments, lights, and timers packed into cardboard boxes (labelled, stacked, and stored in their cupboard), all that's left of Christmas decorations out and about in the house now are these cards, decorating our  cast iron tree.  It's still a Christmas tree for a few weeks, but the seasons are changing, and it's about to turn into a Valentines Tree.


Two more images from the Miser Mom Printer Box Photo Gallery.  Aren't these lovely?  (Okay, not lovely, but, y'know, they really do do the job). 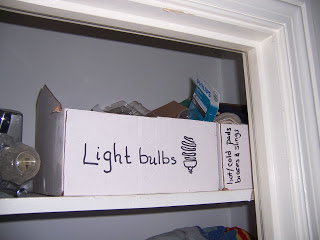 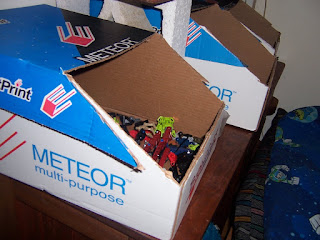