Once upon a time, I wrote a post about our giant, one-time federal tax credit (thank you, tax payers!), and how we put your money where our mouth is.
I've also described how your tax dollars (specifically those dollars that go to the military) come into our home because of the fact that my husband is in the National Guard.


[Update:  My husband points out that he himself paid no taxes in 2009 because that was the year he was in Iraq; we're still waiting to hear the official word on whether he'll leave in November to spend a year in Afghanistan. If he does go to Afghanistan, he'll be a tax-deadbeat yet again, and you and I will be the ones footing the bill for all his fancy travel.]

Today, here's the state/local version of your tax report.  For this to be truly relevant, you have to pretend you live in Dauphin County, Pennsylvania, because that's where one of my son hails from, and  the good people of Dauphin County send me a check every month.  They do so because J-son has fairly severe dyslexia and also a zippy case of ADHD.  Those, together with our adopting him at the advanced age of 12 years, combined so that he was classified as "special needs", and so we get a check each month, every month, until the day he turns 18.

Where does that money go?

Some of it clearly goes into J-son's belly.  He's the eating-est kid I've ever seen, as I've mentioned a time or two.  Or maybe three.  And some of it goes into savings that we'll use to launch him into school or the world once he graduates from high school.

But a good portion of that goes to the after-school tutor we decided to hire when we moved J-son in.  There is already an on-site after school program that (in theory) has homework time, but the program is noisy and crowded.  Since both my boys have problems with focus, and since both boys seem to have learning difficulties, we decided that we should hire someone to sit with them in a quiet space (our home) and supervise their homework closely.
We hired a young woman our family had known for a long time, a gal who was just starting college hoping to study early childhood education, a gal who needed some money.  It was a great fit for all of us.

And after a year, this arrangement turned into an even greater fit, although actually this was because of some trouble and turmoil elsewhere.  While things were going great at our home, things at this gal's home were deteriorating rapidly, so much so that she needed to get away.  For several months, we invited her to live with us, and in May of 2011 she finally got up the nerve to make that change.  Our tutor had become a live-in tutor.

By the middle of the summer, I was starting to feel like this gal needed someone to "claim" her, so I told her that when people asked how we're related, I would call her my "honorary daughter", unless she objected.  And that is how our family got K-daughter. 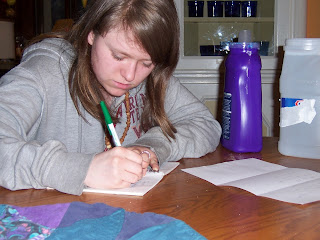 Back to the tax side of this:  Even before she moved in, paying K-daughter has led to our own tax complications because of the mounds of paperwork involved, but I've learned to deal with that.   (Having her on-site seems to have not made that horrendous paperwork any more horrendous).  Aside from the paperwork part, though, this seems to be an all-around win.  I have someone at home to be with my boys while they practice drums, do their homework, and take on a few chores.  K-daughter earns some much-appreciated money to help her with her own schooling.  And the boys?  Last year, N-son's teacher told me that he's now reading at grade level, for the first time ever.

Tutoring, college money, and child care.  Your tax dollars at work.
Posted by Miser Mom at 3:36 AM