The weekly grocery average is still $138/week.  Of the $150 we spent on grocery supplies this past week, the heftiest price tag goes to this pile of glass, metal, cardboard, and (sigh) plastic:
I've bought my last set of canning jars for the season.  Or so I say.  The reason for the latest pile of canning jars is the giant pile of apples:  2 bushels for $27 from a local farmer.
There were other purchases besides apples and jars:  there are the mushrooms J-son asked for so he can make stroganoff (we're hoping they don't go bad before he can follow through on his promise). There was peanut butter, cereal, and dairy products.   But the apples and the jars, they were the most fun.

Because what's not counted into the totals are all the things I mooched.  Such as, mooching an idea.  Erica at Northwest Edible Life wrote earlier this summer about canning swirly apples, and I fell into apple lust, or at least into swirly apple lust.   I've mooched this idea (although she notes she mooched it from another blogger.  I say we pass the mooching along).

Next mooch:  my friend June is the one who travels deep into farm and orchard lands here, and she's the one who picked up the apples for me.  ("Are you sure you want two bushels?" she asked.  I have no idea how much a bushel is, but I blustered and said "Yes, of course I'm sure!").  The wagon pictured above holds one-and-a-half bushels.  We're up to our knees in apples.

Next mooch comes in the form of the apple peeler corer itself, which I discovered to my utter joy that my friend June owns.  June is nothing if not a good sharer, and she loaned our family her machine this weekend.  It was even better than I could have hoped.  My kids fell in love.  Swirly apples, fresh off the peeler-corer: they are all the rage.

When we came home from church on Sunday, I announced I was going to start canning apples in earnest.  N-son begged to be allowed to help.  I said yes.  (J-son asked if he could go clean his room -- I kid you not -- and I said yes to that, too).  N-son wielded the peeler-corer nearly solo, to the tune of a dozen quarts and 17 half-pints of apples. 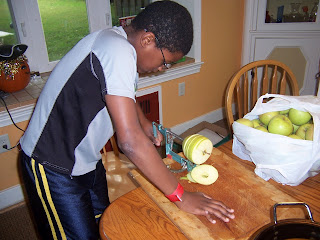 After that, N-son got tired of swirling and he asked for permission to go clean his room.  (Did some alien steal my boys and replace them with pods?  If so, I need to go thank that alien).  I took over and swirled up apples for seven quarts of applesauce (using my yard-sale purchased apple saucer) and one quart of apple juice.  At that point, with another half-bushel of apples to go, the blade bent on the peeler-corer (yoicks).  So I got out my food processor and knife, and I sliced up a bunch of apples to dry.

1)  I'm going to figure out how to get a new blade for June's peeler corer.  The on-line reviews of her particular machine say this has happened to other people, too, so I'm going to splurge and buy a sturdy beast for myself and my family.  Yes.

2) The apple saucer I bought for cheap at a yard sale -- the kind that's a cone with a wooden pestle -- is gobs and gobs of work, plus I can't seem to get as much of the sauce out of the apples with it as I can with the other strainer (the kind with a crank arm) that I usually borrow (again, from June).  I'm putting my purchase back into circulation; I'm debating buying a machine of my own. 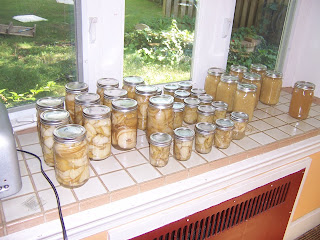 However, with the apples taken care of, I declare the harvest/preservation season DONE in the Miser Mom household.  Done-done-done. We're finished.  Canning season is over.

Time to stop buying and preserving food, and time to start eating it.  Ahhh!
Posted by Miser Mom at 3:42 AM