How to buy expensive things

Today my husband is giving my brother-in-law advice on buying bicycle parts:  buy the expensive components, not the cheap ones.  The expensive ones last so much longer than the cheap ones -- which break often -- that he'll save both money and time with them. 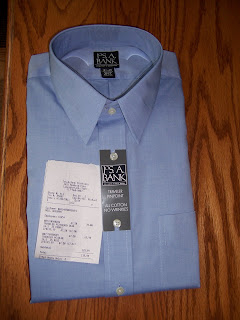 So now is the time you might expect me to start shuddering or foaming at the mouth.  But in fact, I approve.

As far as the bike stuff goes, I myself would describe it as a contrast between "durable" and "flimsy" rather than "expensive" and "cheap".   My brother-in-law uses his bike to commute, and bikes are a lot less expensive than cars.  It's hard to yard-sale for high quality bicycle components.  So I agree he should think long-term.  (It's the equivalent of buying cloth napkins once to avoid paper napkins in the future).

I'll also add (cautiously, because I don't want to set off any snob alarms) that my husband has to dress to different standards than we do.  He does PR, and his whole job is about making a good impression, often with people who make (and spend) lots and lots of money. My boys are in school -- suffice it to say, they're not wearing suits and ties each day.  The people that I work with tend to be 18-year-olds who live in dorm rooms, not 68-year-olds who live in pent-house apartments.  As a professor, I am able to dress slightly more formally than my colleagues while still spending so little.  That doesn't mean my colleagues dress like hobos, it means that Americans tend to be wasteful people who get rid of lots of useful clothes simply because their closets are so full.

And, like the bicycle components, my husband's shirts last longer.  These are the 3rd and 4th shirts he's bought since he came back from Iraq in January 2010, and he was able to wait until he found them on sale at just over half-price.  It's a different kind of frugality than I've been writing about, but it shows he's not living on an entirely different planet.

So, the hundred-dollar bike parts and shirts: I approve.

Email ThisBlogThis!Share to TwitterShare to FacebookShare to Pinterest
Labels: married to a non-miser, Spend less money