What a week it's been here in Miser-Family-Land!  Even ignoring the outside world, life here has been fulsome.   For one thing, several of my far-flung family members are now near-flung again.

N-son returned from his voyages up and down the east coast of the U.S., and he's settling back into life in his new apartment.  While he'd been gone, I bought him some shelving, and since he's gotten back, I gifted him with a baking pan for pizza, but he's still managed to make it all the way back over to our home (all 1.3 blocks of walking) for a couple of dinners and waffle breakfasts. 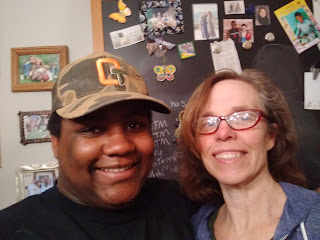 My husband, who had been traveling Europe and the middle east for 5 weeks, spent the first part of the week getting a first-hand look at how Paris was progressively clamping down on its city life.  And then he had a completely lovely and uneventful trip home, and he is back in the U.S. now where obviously he is perfectly safe from any threat from here on out.  Phew.

Yes.  Even if the news weren't full of giant red balls of danger pulsing all over our maps, our lives would have been interesting.  But the giant red danger balls are everywhere on the internet, and of course that affects us, too. 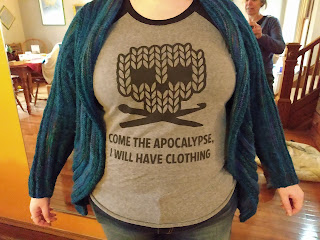 There is a bit of anxiety, but on the whole we seem, mostly, to be handling things well so far.  I-daughter already owned the t-shirt that proclaims knitting readiness.    Because of my own canning proclivities, I already happen to be sitting on top of a basement full of food.   And it's not too bad for me to be "stuck" at home; as one of my students wrote to me, "It feels like house arrest except a lot better because I don't need to deal with the existential angst of having actually committed a crime. . . . we are all supposed to be practicing social distancing (hah, like that's hard for an introvert like me). "

I've done bits of what I can.  I filled out my census forms, so no one has to come to our home in person.  I donated blood.  And then I dove into trying to teach math to people I can't see.

I'm realizing increasingly that I just won't be able to teach "synchronously".  Every time I've attempted this so far, someone's internet has bugged out (sometimes mine), so I'm developing videos and modules that my students can do whatever the heck time zone they're in, wherever they want, and whenever their wifi cooperates..

And I peek at the outside.  I got this very nice email from my former host daughter, Y, now in med school:

One of the most frustrating parts of life recently is that there is such a need while I'm "only a student" (aka can't see patients on my own, etc.). HOWEVER, I'm pretty excited now because I'm going to my first hotline shift at CHOP/UPenn tomorrow! Will probably be there for a few hours every week taking calls so the physicians can actually get back to their work in the hospital (not in the call center).

The one of us who loves this situation the most is Prewash, who gets to have me home all day, and who (especially as the weather warms up) gets to sit on the front porch and offer love to passers by.  I can't touch my friends, but all the experts say petting dogs is still okay, and so our dog and our neighbors take advantage of that social-distance-loophole.

And that's the news from our family, which continues to be rich in our adventures.  We wish you and yours the best in these unusual times.
Posted by Miser Mom at 2:01 PM