Life continues to be rich and full in the Miser Family Household.  Whoop!

The week began with an overnight storm, and so I woke up Monday to see the the snow sitting heavy on the tree branches while the sun played peek-a-boo behind the clouds.  It was truly beautiful.

My husband is still hobbling around on his bad knee, looking forward to the end of March when he gets a brand new titanium one.   When his buddies criticize him for riding roughshod on his knee, he points out he'll only have it for a little while longer and might as well wear it out and get what use he can out of it.  In preparation for the upcoming surgery, he had a blood test that told him he has no diseases detectable from such a test.   In the meanwhile, he's still going to protests and jaunting off to D.C. to see his youngest daughter on her spring break.

In the middle of the week, I tried to show up 5 minutes early for our church's Ash Wednesday services, but in fact I was 11 hours and 55 minutes late.   It turns out that I was right that the services started at 7, but a.m., not p.m.  Whoops!  Fortunately my very hip pastor was hanging out at our Church's ESL service, and he put fake ashes on my head and told me to dust I'd return, and then sent me home.  Most efficient church services I've been to in my life!

As Lent begins, I'm trying to cut back on added and/or processed sugars, and I'm reading a bunch of books on the evils of sugar and processed food.  I think this reading is making me even more fringe and counter-cultural than I already am . . . and I don't know if this is a good thing or not.

And speaking of living an unusual life, this Friday we celebrated our annual Zoo Dinner.  Behold the cow, unicorn, shark, tiger, and dog who attended!  (There's also an elephant hat in honor of my absent sons). 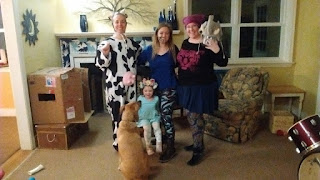 We had our usual ham-bear-gers, that taste yummy but photograph badly; we also had Boa Constrictors and mice.
And this year we added turtles swimming along a coral reef.


I-daughter/Tiger introduced A-child/Unicorn to the joys of eating through the bars of the chairs.  (Which, to be honest, is a lot more of a joy to 3-year-olds than to people who have lived a decade or more, although the rest of us have a go at it out of tradition.
As we head into spring break, I've taken the advantage of the weekend to dive into painting rooms that my children had managed to dilapidate.  So I'm re-lapidating them.   Ah, the smell of paint!

And that's the news from our family, which continues to be wealthy in our adventures.  May you and yours be similarly prosperous!
Posted by Miser Mom at 5:29 PM