Life continues to be rich and full in the Miser Family Household.   On Friday, March crept in like a sleepy lion, quietly covering the land with a soft blanket of snow, and then curling herself into a ball with her nose tucked under her tail, and slept.  Then, on Saturday, March got up on her feet and roared a hairy new blizzard of snow and ice into the landscape.  It's been a nice day to stay inside and work on my taxes, and how often do you get to say that?

But as I wrote last week, our February ended with a fantastic celebration of Black History Month.  It was so good to have so many kids back in the house (and, not kidding, to know they'd soon all go away again.  Yeah).  But while they were here, J-son did push-ups with K-daughter on his back, and then we compared muscles, and we had a bunch of good old goofiness.


N-son seems so happy at his school, but he also got to appreciate the fine things of home: Sunday morning waffles, sleeping in his own bed, going to the gym to play basketball with his friends, having his niece A-child make a big deal over him.

Speaking of A-child, K-daughter texted me to say,


A-child and I have been studying our solar system this week. We decided we would make a mobile of the planets to hang in her room. She is so thrilled that she knows the names of all nine (yes, NINE, pluto ftw) 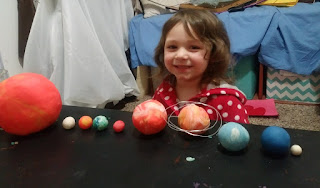 Later in the week, J-son called, and even through the phone you could hear him grinning ear-to-ear.  He's got a summer job!  He'll be a counsellor at a sleep away camp. He's really good with kids, and he's really looking forward to living more on his own, so this is a wonderful next step.  And his first regular job!

My husband has mostly been within 250 miles of home this week, which I guess counts as not traveling at all, by his standards.  Museum conferences down in D.C., protests in Philly, a bunch of book groups and torah studies, and such were his out-of-house activities; and inside the house he got to be the one to oversee our new refrigerator delivery.  He also walks me to work and makes dinner when I get home.  I think I'm just about the luckiest spouse alive sometimes.

As for me, I'm learning that I never, ever, ever want to get a job as a copy editor --- but I'm super grateful for the job my copy editor is doing on our book.  Apparently, I still can't spell pixelated/pixilated/pixalated . . . but my copy editor can.  So yay for that!  And in my copious spare time* I've been starting to repaint some of the rooms in our home that used to have kids but now just have dents in the walls.   But soon the dents will be gone, just like the kids are, with the difference being that it's a lot more fun to have the kids come back every now and then.

And that's the news from our family, which continues to be wealthy in our adventures.  May you and yours be similarly prosperous.
Posted by Miser Mom at 4:58 PM