Plumbing with my son

One of my resolutions/goals/plans (whatever you want to call those things) for the year was to do a weekly house-fix task with J-son.  The reasoning was partly to take care of deferred maintenance around the ol' castle before my sabbatical ends, but also to give J-son himself some attention and care.  Time-In with Mom. Not to mention, Mad Skilz.

The nice thing about a goal like this is, even a partial victory leaves everyone better off.  Since January, J-son has gotten a lot of attention and skill-work from another direction (dad and boxing), so the weekly house-fix has been more like a monthly house-fix.  I dug post-holes and repaired the dog fence myself; I haven't gotten around to drop-ceiling repairs yet.  But at least J-son and I together replaced smoke detectors and fished toothbrushes out of toilets, so y'know, we're not at zero.

Here's the latest Time-In House-Fix: replacing a shower head.  I wrote a long time ago about how easy this is -- basically just like changing a light bulb.  The lesson of this little exercise wasn't so much about teaching the intricacies of plumbing work as showing J-son by example that the project is super easy.

What happens if you get a new shower head and you don't like it?  Well, then, you just take it off and put another one on, silly!  The shower head that was in our bathroom was one I installed about 5 years ago.  After all this time, I decided I really wanted one with a hose, not because I need the hose attachment while I shower, but because having the hose makes cleaning the tub SO much easier.  So, I biked to the hardware store, found the most water-miserly hose attachment I could find, and biked it on home. (Cost: $37).

I handed the package to J-son and gave him some tools: wrenches and teflon tape. (It turns out he didn't need me to get him any of these).  He read the directions -- the little package in his hand is the teflon tape that came with the shower head. 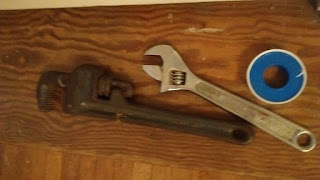 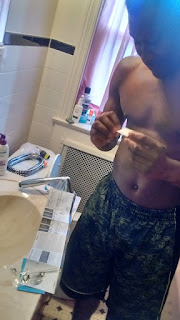 He didn't need the wrench, either, it turns out.  Here he is removing the old shower head. 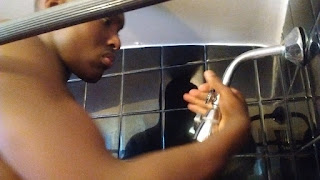 (Can you see the muscles?  Did I mention boxing?)  He got the old shower head off and the new one on so quickly that I didn't even have time to take good pictures. 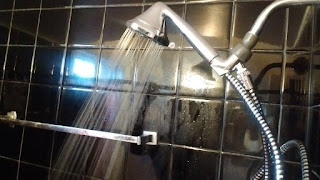 Email ThisBlogThis!Share to TwitterShare to FacebookShare to Pinterest
Labels: Energy use, rearing children, what she bought