J-son gets a job! (briefly)

Saturday was J-son's first day of work.  He was seriously nervous beforehand.

And good reason: this first job has been a long time coming.   How long?  We started the process of job searching a year and a half ago -- not searching terribly seriously at first, mind you, but still a start.  I had a "Financial Summer Camp" for my boys in 2014, and as part of that, the boys created their first resumes and filled out their first-ever applications (for a volunteer position).

Nothing ever came of that application, aside from a few nibbles ("you're next in line when we have an opening", but they never had an opening).  But it was a good first-round lesson on paperwork.

We started job searching again in earnest at the beginning of this summer, using what I called my "Viktor Frankl summer plan".    We filled out what seemed to J-son HUGE numbers of on-line job applications (I think it was three or four of them).   As always seems to happen, though, it was networking that got J-son that first big break; I heard from a neighbor that a local amusement park was a great place for teens to work.  J-son sent in a job application, and in July, there came a call back for a job interview!  yay!

That job interview was both J-son's big break, and also what broke J-son.  He stopped applying for other jobs, because this one was obviously imminent.  We hunted unsuccessfully for official paperwork (a social security card -- somehow, that didn't seem to come through with all the rest of the adoption paperwork back in 2011), and then we gave up looking and applied for a new card and a work permit.

But J-son did eventually get the interview scheduled.  Setting a time for the interview took several tries (another few weeks, I think?) because of all the many trips our family was going on.  In early August, our family got the good news:  J-son had a job!

But before the job could officially start, there was orientation.  And then training.  We'd get last-minute calls inviting J-son to these sessions at seemingly random times, and only at a moment's notice, and the last-minute-ness of these combined with our own schedule delayed first the orientation and then the training.


[I have to say, though, I'm super-impressed at the orientation and training materials from this place.  It's clear that they know this is most kids' first jobs, and the place seems determined to do right by the next generation.  It shows them how to set up direct deposit, what to wear, how to clock in, and even starts everyone in a 401K plan that they have to actively opt out of, rather than opt in to.]

By the time both orientation and training had happened, we were well into the fall, which is, of course, a slow time for amusement parks.  J-son used the time with me to open a checking account to go along with his existing savings account.  (Hooray for our FoolProofMe lessons, which prepared the kids for this day!) 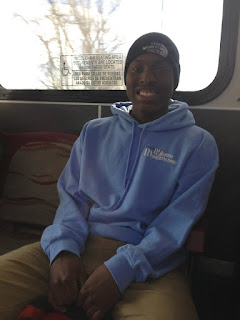 And now, with a mere two weeks to go before the park shuts down for Winter, J-son has had his first day of work.  I might have mentioned he was super nervous.  Did I mention that?  Did J-son mention it 85 million times beforehand?  Mom, when I get there, are they going to show me what I'm supposed to do? Yes.  Adorable.

I bought him a bus ticket.  We watched videos on how to ride the bus (I *love* our local bus service and how helpful they are.  These videos are great and non-judgmental and step-by-step.)  I had my husband watch a video on how to put bikes on the bus, and he got so excited that he rode the bus with J-son to work the first day.  Here's J-son inside the bus, and the two bikes out the front window of the bus.  (See the bar mitts on J-son's bike?) 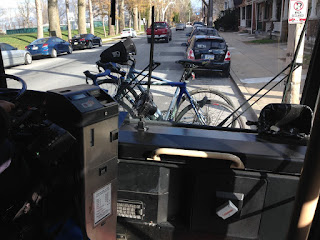 Okay, so J-son will only have about ten days of work before the park closes down until May.  But look at how much he's learned, so fast, from this little bit of paid employment.


As for me, what I sort of already knew, but got to learn again:  this takes lots and lots of time.  N-son is certainly going to start a lot earlier than June when it comes time for his summer job search.  Also, make sure you have social security cards somewhere.
Posted by Miser Mom at 2:56 AM