N-son started drum lessons back in 2009, when he was a youngster of 9 years.  I'm not a Loud Noise Lover myself, but I knew he was, and I also knew he needed some kind of therapy/training to help him connect his left and right side, which had trouble communicating with each other because of a stroke he'd had in utero.  I figured drum lessons would be something he might enjoy and that would force him (in a good way) to do the hard work of mending his own body.  I bought him a drum pad and a pair of sticks, signed him up for lessons, and told him he could get the actual snare drum (that actually made noise -- ouch) if he diligently practiced all summer long.

In my very first blog post back in 2011, I wrote about drums and frugality:


I know it's not easy at first to live a life of thrift and discipline, but most great things aren't easy. Like making music or excelling at sports or learning to cure illness, living a life of frugality takes practice. It's something I teach my kids every day, and they're just about as good at discipline and thrift as they are at playing the drums (that is, they're still wild and loud, but they're getting there).

And in this 2012 blog post on "love, money, and employment", I wrote about drums and rewards:


When N-son started drumming, his first snare drum was a long-awaited reward for a summer of good behavior. And later, the hi-hat was a similarly long-awaited reward for practicing regularly with the snare drum. As time went by, we kept "rewarding" his drum practice by eventually "letting" him have more and more pieces of his drum set. Now we "reward" his practice by "letting" him perform in public occasionally. We are totally messing with his mind, rewarding his music practice with even more music practice. But if we'd gone the route of say, paying him for good practice by giving him extra allowance or extra dessert, I don't think he'd be the avid drummer he is today.

Somehow, all that "messing with his mind" seems to work.  It seems to have worked both in the physical sense of developing coordination and timing, but also in the mental sense of developing a passion for music and rhythm.  In the physical sense, man, this kid is good.  He's started playing at our church services occasionally; I've heard him at a few recital concerts; he's got some real talent.

But it's even more gratifying to see how the drums have become a source of joy and discipline in his own life.  Last summer when I was doing a presentation on organizational techniques, I pointed to N-son's bedroom, where just about everything appears to be a mess -- but his drum set remains completely free of clutter, and ready for action.  When we asked what he wanted for his birthday or for Christmas, the only things he could think of were "a djembe" (which is a kind of an African hand drum) and drum brushes.

And recently, when N-son started swirling a bit into social difficulties, we turned back to drums as a way to throw him a life line.  N-son can be a bit of a hedgehog, a little prickly, especially when he gets uncomfortable.  He tends to get uncomfortable when he's in groups of children his own age, so social settings at school can be a source of frustration and/or alienation.  To help N-son find a path around this, we turned back to music.  We signed him up for a local chorus, run by the enthusiastically welcoming group called "Music for Everyone".  Welcoming is exactly what N-son needs, aside from the music aspect, and this group met and exceeded all expectations.  (And it's largely adults, which is great for N-son's comfort level and also for giving him good role models.  Double win!)

After just one one rehearsal, N-son is hooked.  Here he is, one day later, avidly checking his music on his phone.  Rehearsing without someone reminding him.  Driving his brother J-son a little bonkers by walking through the house singing Carol of the Bells over and over. 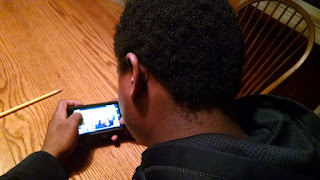 And speaking of J-son going bonkers, I really wish I could find something like this for him.  J-son has been sailing in and out of the seas of moral rectitude, and lately he's been more out than in.  I want a star to steer him by, one that doesn't shine with the light of a teenage sneer group.  What he wants most of all right now is to be liked, to be cool.   But the twin siren songs of coolness and boredom have been luring him onto dangerous rocks.

Aside from re-starting the process of therapy (thanks to my husband making appointments and arranging school  excuses and bike-transportation), I think I want to try to get J-son involved in a MakerSpace near us, one where he'll get to play with metal machining, 3-d printers, and laser technology, and also with adults who know and love the equipment and its potential.  I need to find a way to "parent out", to use the adult communities around me to help guide him toward a stable future, one that he'll actually want to work hard at, even without his mother looking over his shoulder.  I need to help him find a virtuous path that becomes its own reward.
Posted by Miser Mom at 4:31 AM