I'm writing this post from a hotel room, chilling out after a talk I gave at a regional math conference in a region that happens to be far from my home.  And even though the folks who invited me are paying my travel expenses, I'm doing my best to keep my trip as minimal (in a monetary sense) as possible.

Here are two of of my minimal efforts:  rental car and grocery store.

Rental Car.
So, it turns out that reducing our family fleet down to one car (plus nine bikes) saves me and my husband a bunch of money, even though it means occasionally we rent a second car for long trips.

But does renting an extra car mean I'm foisting an expense off onto my mathematical hosts?  Doesn't renting always turn out to be more costly in the long run than owning?   Actually, to my surprise . . . no.  I've been amazed at how cheap it is to rent a car for a long trip.  In my case, I'm over this weekend, I'm driving something like 1300 miles roundtrip (crazy, but I kind of like really long drives).  If my hosts were reimbursing me for the IRS mileage rate on my own car, they'd be forking over nearly $750.  If I'd flown, between airfare, parking, and shuttle costs, it wouldn't have been much less than that.  But renting a car, even including gas, is going to come to less than $300 -- a more-than-50% transportations savings for the folks who invited me.   That sort of floored me.

And as a side benefit, driving in a modern car is amazingly fun.  I still remember how much I loved the quiet ride of our Prius when I first bought it used . . . in 2002.  (It's an original 2001 Prius).  I still think of it in my head as an amazingly quiet and smooth car.  But my Prius, no matter how I picture it my head, is now an old car.  Folks, it has a cassette deck.

So when I get in my rental car . . . wow, I realize the age of my own.  Not that I'm complaining about my car, mind you -- it's just way fun to temporarily be able to drive a very quiet car.  It's fun to play with the key (which folds, swiss-army-knife-like, into its electronic fob.  How cool is that!?!).  It's a little piece of heaven to be in a car that is the kind of clean that my teen-age-boy-toting, hungry-husband-hauling personal car has not seen in a decade.  I don't need this extravagance all of the time, but as a once-in-a-while luxury, I can take it.

Not to mention, mid-October is a fabulous time of year to drive through Western Pennsylvania.  No photo I took can do justice to the beauty of the fall foliage I drove through.  Ooooh. 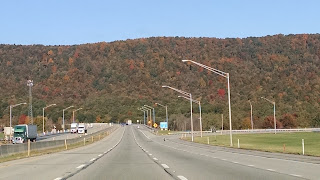 Grocery Store
. . . And then, I arrived at the hotel my hosts had arranged for me.  Clean and quiet, but in the midst of a three-mile stretch of parking lots containing the best-known chain stores of Generic Retail Americana.

By the time I arrived, I wanted real food (I'd packed a gallon of trail mix for eating in the car, but now that I was out I wanted something more . . . um . . . food-y).  And I had my choice between packed parking lot after packed parking lot of chain restaurants:  Onion Garden, Fried Lobster, SubMart.  All crammed with the cars of other diners (at least, so it appeared from the outside).  So I bought my dinner at a grocery store instead. 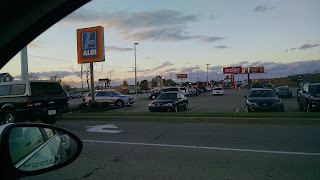 And because I bring a plate, spoon, and napkin with me wherever I travel, I had a lovely sandwich in my quiet hotel room:  sourdough bread, hummus, and pickles.  All of the ingredients for $6.47, with lots leftover for dinner the next night.  And it's just possible there was a bottle or two of beer, bought separately, that my hosts won't have to spring for themselves. 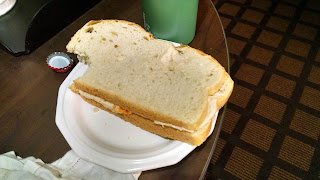 Bonus: scrounging again
At the conclusion of the conference, there were piles and piles of donuts left over, plus cases and cases of bottled water and fruit drinks.  I urged the organizers to urge all the undergrad students to take home donuts, but the undergrads were stuffed.  So with the many blessings of my hosts, I boxed up the donuts to take home to my sons.  I left the bottled drinks with my hosts (those won't go stale, so their math club will get a bunch of use from them in coming weeks and months).

What surprised me (and what sort of always surprises me) is how grateful the people who bought all this food are when someone suggests that they give it away.  It's such an obvious thing (to me), but other people often seem to feel grateful to have "permission" to say, "please take this home with you".   Go figure.