Years and years ago, I thought it would be sort of cute/romantic to ask for a pear tree for Christmas. My husband, who often laments that I never ask for anything, was delighted to oblige, although we waited until my birthday in March to buy and plant the tree (what with, y'know, weather and all that).  And we never expanded the list to include partridges or Lords-a-Leaping.

To defend my reputation, I would like to point out that it's not true that I never ask for anything; why, just this very year I hinted none-too-subtly that I would love to get a pencil sharpener for my birthday.  So there's that.

At any rate, I really didn't know what I was getting myself into when I asked for a pear tree.  Pear trees aren't these cute little trees like the cherry blossoms that decorate the edges of our street.  Mine started out as a ball of dirt with a big stick attached, and it's since grown into a 3-story-high tower of leafiness.


Moral 1:  Check the natural height of trees before buying and planting them.

Of course, I could trim the tree down . . . at least that's what I thought once I started to realize what this Franken-tree would mean to my backyard.  I've since gotten other fruit trees, including a prolific peach tree, and I've learned to heed advice that I should annually prune it to a max of 7-foot high.  A professional tree trimmer happened to be in my neighborhood last summer, and I asked him to look at my Pear Tower Tree.  He wrinkled his nose and said, "I know what you want me to do, but at this late stage doing it would go against my professional ethics."   To wit: my pear tree and I have incurred the moral disgust of professional arborists.


Moral 2:  Pay attention to pruning advice when the tree is still young enough that it's cute.

The problem with the size of my tree is two-fold:  one is that it shades a bunch of my garden where I want to grow other things, and the other is that most of the pears are just too high for us to reach.

But to the good, there are lots of pears on the branches.  Lots and lots of pretty pears. 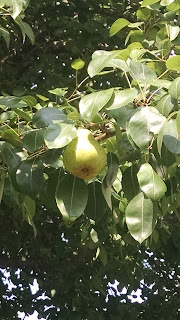 Except here's the weird thing about pears that I didn't know when I got this tree:  you can't just pick pears off of trees and then eat them.  As one of my favorite canning  instructions sites points out,


"Most pears ripen from the inside out, and if left on the tree to ripen, many varieties will become brown at the core and rotten the middle. This is especially common in most fall pears. Pears have a characteristically gritty texture caused by cells in the meat called stone cells. Although modern varieties have fewer of these stone cells, all varieties still contain them. Picking the pears before they have matured and holding them under cool controlled conditions prevents the formation of too many stone cells, and results in a less gritty pear!"

Okay, so we've got a multi-step process:  pick them early, store them under carefully controlled conditions (hah!!!), and then hope like heck we pull them out of the ripening process exactly when they're at the right stage where we can successfully eat/can/cook them.

Already you can see the pears rotting on the tree here -- and yet, if you pick these, they'll feel hard on the outside, gooshy and disgusting in the middle.  Sigh. 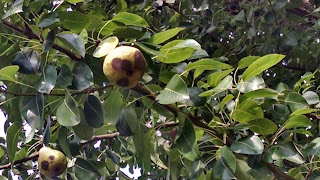 So it's time to rescue the viable pears now.  On Tuesday, J-son and I spent an hour or so together picking pears. 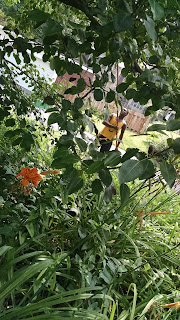 I worked from the "inside" (under the tree) picking as many as I could by hand.   J-son worked the outside, using our pear picker -- a long pole with a hook and a basket. This allowed him to reach about halfway up the tree. 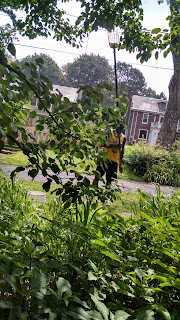 Pears are an adventure to pick in other ways than height and ripeness -- unlike peaches, they're the about the same color as the leaves around them. So it's hard to see them.  We keep thinking we'd picked one section of the tree clean, and then we'd switch our angle and see crowds of pears hanging out in the exact spot we'd just picked, appearing there almost as if by magic.

In the end, we picked about two 5-gallon buckets worth of pears.  In past years, when I'd gotten fewer, I tried to ripen them in a bottom drawer of the fridge.  Sometimes that worked; sometimes it didn't.  This year, the refrigerator isn't even an option:  these babies aren't going to fit there.  So I put them in cardboard boxes near the canning jars in my basement.  Cool?  Sort of.  Controlled?  Ugh.  Who knows what kind of mess I'll find when I come back from my travels two-and-a-half weeks from now?  Maybe I'll have ten gallons of beautifully ripened pears.  Maybe I'll have a rotting mess.  Maybe I'll have several boxes of still-hard objects that could take the place of ceramic pears. 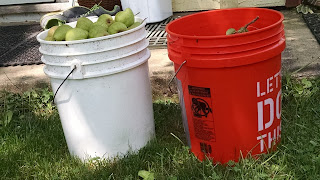 I've spent a bunch of time this week taking care of something of mine that was supposed to take care of me.  I don't have to pay money to take care of my tree (unless I want to find a tree trimmer who will sacrifice his professional principles to make my tree a little less unruly).  But I have spent time and energy and a bit of mental effort that I could have used for other parts of my life.

And yet, although there are many things I would do differently if I were choosing a new ball-of-dirt-with-stick-attached today, I'm so glad to have this living thing sharing my yard and my life. It's a bit of a miracle that I can walk through my yard and have food (or at least, potential food) hanging in the air above my head.  It's a blessing to gaze out my window at something that showers me with gifts, even if I don't want them right now, or even if I don't want them in exactly the form that they're delivered.

So maybe my next tree will be a pencil-sharpener tree.  We'll see.
Posted by Miser Mom at 6:47 AM

Email ThisBlogThis!Share to TwitterShare to FacebookShare to Pinterest
Labels: Food, Things owning us