Here's a little story about newspaper, plastic bags, dead squirrels, and constipated washing machines.  And the story has a happy ending (except for the squirrel).

The backdrop to this story is that I've worked hard to convince my local paper carrier to bring my newspaper "naked", meaning with no plastic bag.  This is harder than it seems; first, I made a newspaper box to keep the paper dry and clean, but even so, every time we switch carriers I have to call up and re-request no bag.

Still now, mostly, I get naked newspapers.  Well, the papers do come wearing rubber bands, but I can live with those. 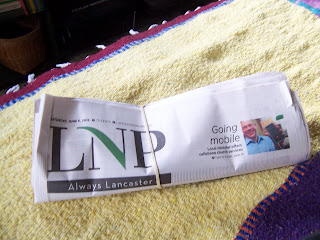 People have pointed out to me that plastic newspaper bags are great for picking up dog poop -- and this is true.  (More on that later).  But I do believe plastic bags are evil, and so I'd like to point out that it is also possible (although perhaps a bit more icky) to pick up disgusting things with the newspaper itself.  For example, we recently proved by example a person can pick up dead squirrels with newspapers.

It just so happens that Saturday morning we discovered a dead squirrel lying in my garden, looking for all the world like he was just taking a nap there. Weird.  (Lewis Thomas in Lives of a Cell remarks on how seldom we see death -- we'll see animals that get hit by cars or killed by our cats, but we don't often see animals that die of natural causes. Somehow, they seem to find private places to die. So seeing a dead squirrel curled up by my tomatoes was really an odd occurrence).

N-son christened the squirrel "Jimmy".  We used newspaper (the obituary section, naturally) to pick Jimmy the Dead Squirrel up, make him a little newspaper coffin, and bury him in a leaf pile


But even despite my best "please-no-plastic" efforts, we do get lots of plastic bags in the Miser Mom household, and the boys do stuff these bags in their pockets when they walk the dog.  The boys do not always take the bags back OUT of their pockets.  And hence, the bags recently have ended up here . . . 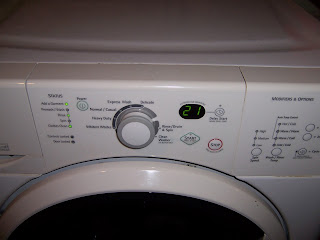 The last time our machine was constipated (which was in April, so really not very long ago -- sheesh), I was 10 feet deep in paperwork.  My husband called the appliance repair folks, who cheerfully came over to do their enema thing.  They also charged us $111.

But can I say, a clogged washing machine filter is REALLY easy to clean?  I mean, really really easy.  The hardest part is knowing whether it's actually possible for an untrained person to do it, and the easiest way to find out that the answer is YES is to do an internet search for the error code.  Here's the fix, in three easy steps.

1.  Take off the front panel.  It helps to have the right kind of hexagon socket wrench (those generally cost a lot less than $111, by the way).  Our panel has just one screw holding it on.  (Did I mention this is easy?) 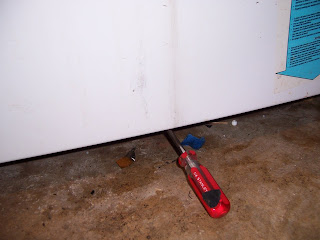 2.  When you remove that front panel, theres's a white tube with a knob.  Unscrew that knob, and then stand back . . . 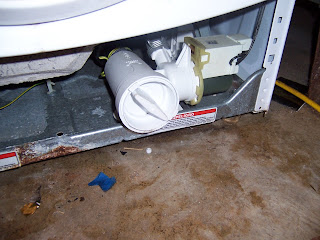 . . . because the washing machine feels blessed relief!  If you don't  have a drain in the floor like I do, you'll want a bucket or two. 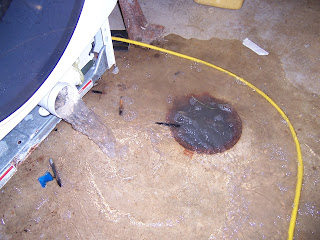 3.  When the water is done gushing out, fish out the pens, the coins, and -- yes -- the plastic bags.  Then reassemble.

The fix took me 20 minutes, and that time included looking things up on the internet, searching for the right socket wrench, waiting for the water on the floor to go down the drain so I could reassemble everything without getting soaked, and basically the entire repair.  It's funny to see other people on the internet marveling at how quick and easy this is, too.   My favorite site was fixya.com, where people gleefully shared what they'd found in their clogged filters.  The list includes
I think I'm the only one with newspaper bags, and I only snagged 15¢ --- but then again, we've only been collecting money there since April.  And the $111 that I didn't spend on appliance repair?  I'm not sure what I'm going to do with it, but I'm definitely not leaving it in my pocket.