Get lots of free stuff!!!

I'm good at getting free stuff.  I could go on and on about the nifty things I dragged home from various curbsides after an early-morning jog on trash day (chicken wire, bean bag chair, lumber . . . ).  I could sing the praises of my friends who have offered me waffle irons, clothes, earrings, chutney, and more.  I could tell you about yard sales and the occasional terrific "Free Box" finds.

But that's not what I'm thinking about today.  Today I'm thinking about all that stuff that I get that I do NOT want to get, and what a pain it is that I have to pay (in time, in money, even in space) NOT to get it.  Junk mail.  Plastic f-ing bags.  Senseless packaging.

According to the Livestrong web site,


The average American produces about 4.5 pounds of trash each day. About 31 percent of that trash is packaging and containers.

Wisegeek places even more of the blame on packaging:


So how is it that so much garbage is produced? Most of the stuff that fills the landfills is packaging, especially in the form of fast-food containers, but office paper, disposable diapers, Styrofoam inserts, and plain plastic bags also contribute an important percentage to the total waste production of the country. In fact, paper waste makes for about 35 percent of the total material filling up landfills.

In my own household, now that I compost food waste, and now that I recycle glass, cans, paper, and cardboard, the finger points even more pointedly.  What's left in my garbage is almost entirely packaging, followed by glossy stuff: catalogs, magazines, sales advertisements.  (Tissues take a distant but significant third place).   Since December, every time a new catalog comes into my home, I call the company and ask to be removed from the list.  But new catalogs keep finding me.  Seriously, who would think that I would want to buy anything at all from the American Doll Company?  How on earth did those people decide to put me on their list????

And plastic bags, they follow me where ever I go.  Okay, I can understand why, say, a bunch of grapes would come in a bag.  But plastic bags seem to be standard issue for everything these days.   Umbrellas. My husband's dry cleaning.  Even my newspaper . . .

. . . until now.  For the first time in 5 years, my newspaper comes naked.  Behold!
The transition was not free.  I tried hard to get rid of plastic newspaper bags last summer, but I came up against the Prime-"Do not drive them crazy"-Directive.  Still, 180 orange bags later, it was me that was going a little nutso.

I hired a boyfriend.  (Not my own boyfriend; my oldest step-daughter's boyfriend).  His task was to build a newspaper box while spending as much manly-man time with my boys as possible.  He brought an impressive work table . . . 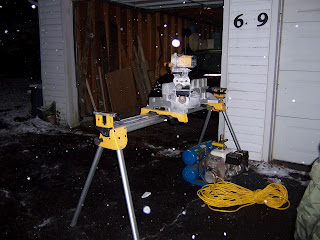 and duly involved his side-kicks to the best of their and his ability . . . 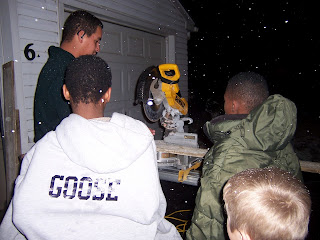 The lessons were good ones, but they were not free.  And I know that I'm asking for extra on behalf of my newspaper carrier, a really great guy who gets paid not nearly enough to put up with kooks like me.  I had to reassure him that I'd rather get an occasional damp paper than to have 365 plastic bags each year on my conscience.  He's going to get an extra tip come the annual X-mas thank-you season.