Last week, during the days leading up to the purchase of my own new bicycle, I rode a bunch of different bikes, and I learned a lot.  Not so much about bikes, actually, but definitely a lot about my husband.

Here are three of the bikes I've ridden.

Bike One is my trusty old used-store purchase.  It's built for stability and safety, both of which are important to me because I'm a total bike wimp.  I decorated it myself in such a way that no teenage boy would ever want to steal it, saving myself the expense of a bike lock.  It's got a big fat cushy seat, huge paniers for lugging groceries, streamers I made myself from potato-chip bags, spoke decorations that my husband bought me.  It's a kooky, visual joy. 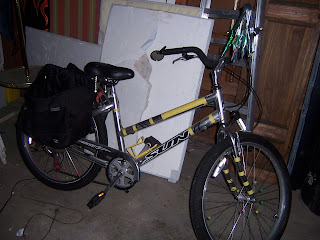 The disadvantages are minor.  One is, it weighs a ton.  I think it's made of solid lead, or cast iron, or something.  So I can't carry it up and down stairs, and I can't easily put it in a trunk.  That means, it can't travel with me.  The other downside to this bike is its rider; I just don't ride it much.  Hence, the challenging myself with a triathalon -- which I can't do on this bike.

Bike Two: My husband's one-speed bike.  (He calls it a "single speed" bike, not a "one-speed".  More on the differences between me and my husband below).  I rode this about 5 miles around the neighborhood with N-son.  I was surprised at how comfortable it felt.  I raced N-son and, even though I didn't win, I tired him out.  Success! 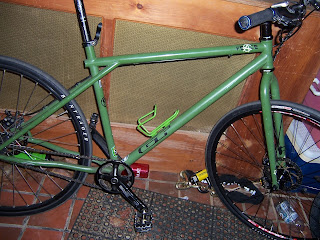 Bike Three:  My friend's bike.  It's a darned nice bike, but it's very small (she's short).  When I rode it around the block, I felt all twitchy and like the bike was about to flip upside down and crash  me into the pavement, or a telephone pole, or something.  Size matters.  I'm getting a much larger bike. 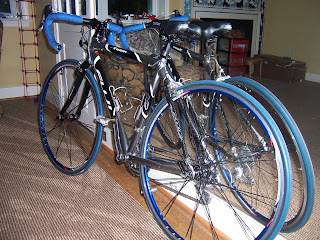 But mostly what's surprised me is the several intense conversations I've had with my husband.  Such as,  . . .

Conversation number 1:
When I mentioned putting a sparkly cow sticker on my new bike helmet to bling it up, he begged me not to.  This is the guy who has more than a dozen stickers on his car.  This is the guy who sometimes wears neon-colored, form-fitting spandex to our evangelical presbyterian church.  But stickers on a helmet would make other cyclists take me not seriously, he says.  To which I reply: compared to them, I'm not serious!  They should take me not seriously!  This disappoints him, I think.

Conversation number 2:
My husband adjusted the seat post on my friend's bike so my butt would have been about a mile in the air.  I said, that's too high; move it down.  He reluctantly moved it down a half a centimeter.  I said again, too high, move it down.  He started telling me how long my legs are and where a true seat height ought to go.  And I sort of flipped and started yammering about dying and falling from great heights and said in my most serious (yet slightly freaked-out) voice:  move it DOWN!!!  Which he did, but he was totally unhappy.  But I lived.

Conversation number 3:
My step-daughter texted my husband to say she was watching coverage of a triathalon in which "all sorts of very fit-looking people collapse."  This prompted my husband to ask, "have you thought about what you'd do if you collapse during the triathalon?"   By this, he does not mean "which hospital would you go to?" or "who would take care of our children?", but rather, "would you then sign up for another triathalon so you could say you finished one?"  We had a big conversation after this, the basic gist of which is that there's a big difference between competing in a triathalon and doing the triathalon.  My goal is to be able to keep moving for 12-15 hours, not to compete.  If there's a hard hill, I'm walking up it.  If there's a scary intersection, I'm breaking before I get there.  If I get tired, I'm slowing down.   That is, my goal is to not collapse, thank you.

When my husband starts a race, he thinks about the road directly in front of him.  When I start the same race, I think, "Okay, it's 9 a.m.; I'm going to be running until 11 or so.  Can I keep up this pace the whole time?"  Of course, these are the ways we each approach personal finance, too.  It's been surprising that he's just figured out that this is the way we look at endurance races.

All of this is prelude.  It is prelude to my new bicycle. Thursday:  the Sudden Painful Death Machine comes home.