There is a plant-killer on the loose.  She is I.

Exhibit A: the Weeping Peach Tree.
You see before you a tree laden with peaches, one tree that I hadn't had the heart to prune (so to speak).  As a result, this tree was sagging under its own weight. 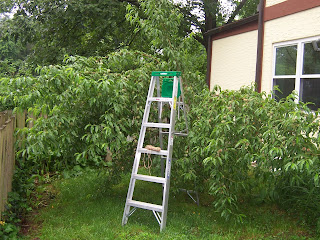 I finally had enough pity (and/or fear) to venture out with the pruning shears.  Before I went out, I did some research. A quick internet search took me to a page full of annoying videos of a peppy Park Ranger; I gave up on the ranger and went to a second site.  Following their instructions, I lopped off everything over 7 feet high, straggly branches near the bottom of the tree, and any branch growing down as opposed to up (or, in my optimism, up-ish).  The end result is not beautifully symmetric, but at least it's not dying under its own weight. 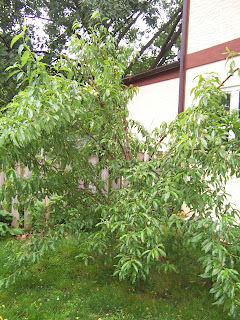 Lopping off peach-laden branches was harder on me (emotionally) than I would have thought.  The boughs were full of buds of fruit, and I was severing them from their very source of life. I was killing my own future harvest (or was I?).  And it felt like my own little peach-gettysburg, as I surveyed the casualties on the ground after the battle.  Four score and seven peaches, after a pruning of the people, by the people, and for the people. 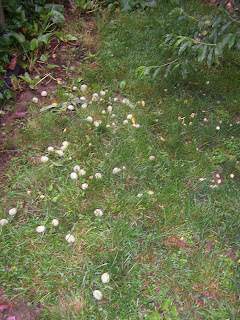 Exhibit B:  Tomato Death and Destruction.
I transplanted my canning-jar-grown tomatoes into the ground about two weeks ago.  They have struggled mightily since then.  The theories for the struggling abound.


Theory #1:  I started them in windows, not under grow lights.  This is the theory promoted by Northwest Edible, and it probably has some merit.  But if I believe the lack of grow lights is responsible, then I have to spend money on grow lights, which I don't want to do.  Plus, I used the same windows this year that I did last year, and last year my tomatoes  were thriving.
Theory #2:  I did not bring my tomatoes outdoors to play before I transplanted them, so therefore, moving outdoors was too much of a shock.  This is my favorite theory.  Why?  Because I can fix it easily (with no money) next year.  My second-favorite theory is below:
Theory #3:  I did not plant the tomatoes deep enough.  Not only the root, but some of the stem should go underground.  This is the theory of my wise neighbor, June.
Theory #4:  Too much mulch.  Another possibility offered by my neighbor, June.
Theory #5:  Not enough mulch.  Who knows?

What do the worst of my tomatoes look like?  Well, some 11 of my 24 tomato plants are dead and gone.  This bare vine, leafless and destitute, shows the last stages of tomato death of one of my plants. 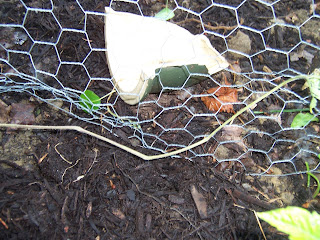 Many other tomatoes are leafless along a long segment, with a shock of leaves at one end, as seen below. 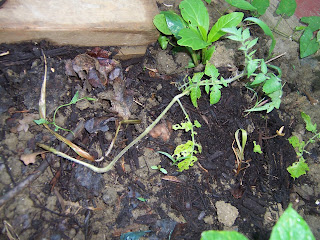 My neighbor June, who favors theory number 3 (that I didn't plant the tomatoes deep enough), pointed out that the tomatoes vines are starting to root out a bit, as shown below. 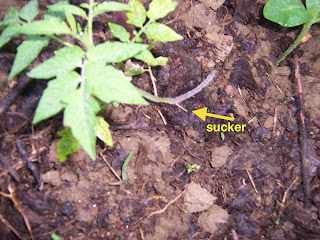 Because of her advice and encouragement -- she was sweet enough to congratulate me on the fact that 15 of my tomato plants are not (yet) dead -- I buried parts of the vines under more dirt.  Tomato updates to follow.

Exhibit C:  The Walnut Tree that Could.
Because the truth is, plants grow.  Even when we (meaning, *I*) nearly kill them, they often come back.  My little English Walnut tree is an example of this.  I planted it early last summer and someone else (this time, not me) ran over it with a moving van.  I tried expensive things to keep that 5' tall tree alive, but nothing worked.  I sadly chopped it down.  But, to my wonder and amazement, from that set of roots, only a few months in the soil, a new shoot emerged. 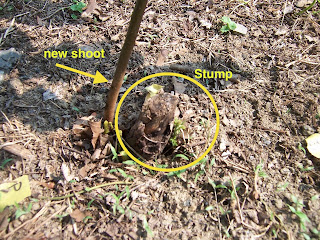 And now, one year later, the tree is about 3 feet tall.  Not as substantial as when I first planted it, no, but not dead either.  Charlie Brown could be proud. 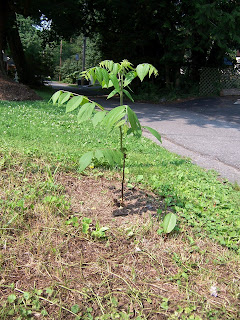 Or, perhaps, the enduring qualities of being nuts.