Who'da thunk that making less trash would involve having more trash cans?  One commenter wrote on another blog a few weeks ago (I lost the link, darn it) something to the effect that, stores make it really easy to bring stuff home, but nobody makes it easy to dispose of those things properly.

How true.  One of my goals for the year is to figure out how to (a) reduce our garbage pick-up to one can every other week while (b) not driving my family crazy.

Obviously, one way to do this is to bring less stuff into the home.  But since I don't go to stores (and my family does), I have limited effectiveness in this arena, unless I flagrantly violate goal (b).  [I suppose I could try to set a good example, shine with the glow of ecological serenity, and hope that my family is so smitten that they long to emulate my transcendent example . . . but somehow I don't think my pre-teen boys and my vitamin-water-loving husband exactly hang on every word this middle-aged mama utters.]

The other way to reduce the amount of garbage is to re-purpose the garbage.  And that's where the multiple trash cans come into play.


In the very ugly picture below, perhaps you can see a white trash can.  The trash in that can will go into the garbage cans and will count toward the tally of trash.  To the left and right of that can, respectively, are a paper bin (goes to my office for recycling) and a can-and-bottle bin (goes curbside).  Also on the floor is a bag with some stuff for Goodwill, a box for cardboard, and a newspaper box.   The cardboard box is a recent addition; we found a cardboard dumpster 2 blocks from my home, behind the college dining hall.  Recycling isn't perfect, but it's better than landfills. 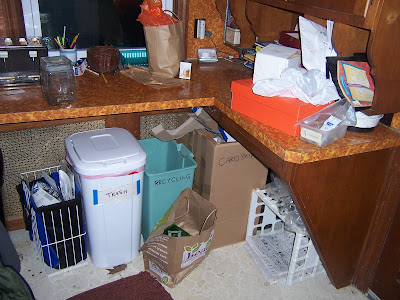 But there's more.  Up above there's a glass jar -- that's waiting to go to market with me on Saturday; I'll get nuts deposited directly into that jar.  (We also take back our egg cartons and milk jugs, too).  There's a bag of orange plastic newspaper bags, which we'll use for dog poop.  On top of the orange shoe box is a box with some styrofoam (the UPS store recycles that).  The rest is clutter.  (This area hasn't gotten a lot of love lately.)

All this doesn't even count the "hazmat" box (lightbulbs and batteries) out in the garage, or the compost bucket by the sink.

I'll say it again:  so far, reducing our trash has meant having a lot of trash cans.  Still no violation of goal (b), from what I can tell --- I'm about the only one going crazy with all this here.  And as for goal (a), so far, we've put out only 2 garbage cans this year.  Not quite to goal (a) yet, but getting closer.
Posted by Miser Mom at 3:35 AM