The t-shirt quilt is now done.  Phew!  When we last left our hero, I was just pinning the t-shirts to the sheet that I used as backing.  For this particular quilt, I decided to add strips of material to the spaces between the shirts.

I pinned the heck out of everything.  Then I rolled the quilt up, and sent it through the machine. 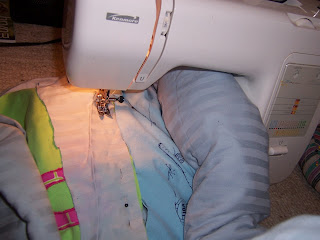 After I'd sewed on edge of the strip down, I unrolled the quilt, smoothed everything out again, and folded the strip over the other t-shirts.
That gave me my horizontal strips.  I did the same for the vertical strips.  And this was the result.
Not bad, really.

Professional quilters probably don't get as much dog hair on the quilt as I do -- all that rolling and unrolling, smoothing things out on the living room carpet really adds to the quantities of lint and dirt that this baby picked up (and we really did vacuum this year, I swear!)  But I shook the quilt vigorously, and it didn't fall apart.  And the t-shirts give it a nice heft.  Could be worse.

Total cost?
So there you have it, a ten-cent quilt.  Dog hair included at no extra cost.
Posted by Miser Mom at 3:40 AM