I pay my boys in "Mommy Dollars".

This isn't a new idea; I've seen other websites talking about this since I started.  I owe my own personal inspiration for the system, in fact, to my sister, who uses a version of "teacher dollars" in her seventh-grade classroom in a small town in New York. 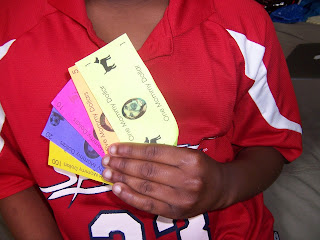 The basic idea is that I print my own currency (I'll describe how in a separate post); I make a list of things my boys can (or must) do to earn money, and I make a list of things they can spend money on.  This last is important -- economists will tell you that a currency gets used only if it seems to have more value to people than other currencies.

Now that I've started this, I've discovered a lot of reasons to love this system, and I'll describe many of those in later posts.  But here's a big miser-mom reason to love it: other people can't thwart or undermine it easily.

What do I mean by that?  With my older daughters, I could give them a careful, thrifty allowance and try to encourage them to budget.  But other relatives or friends would give them money that made saving or budgeting unnecessary.  Especially for children whose parents are in separate houses, this question of how much is a reasonable allowance is tough when one parent says, "$15 per month" and the other says "$20 per week".   And even if nobody is handing my children cash, playground bragging about allowances can leave kids who thought they were making a lot of money realizing that there are other households where they might have gotten a better deal.

Well, my kids can brag that they get $5 just to feed the dog, or $1 to take out the trash, and no other kid can top that.  And at the other extreme, no amount of U.S. money is going to buy my kids TV time or extra library privileges -- they have to save up their mommy dollars themselves.  So they're learning a lot about how to handle money this way, and that is a skill that a miser-mom loves.
Posted by Miser Mom at 4:32 AM