The other night, I was lying in bed with random thoughts flitting through my brain -- the way they do when my brain has decided that it's worked hard during the day and gets to have a party for a little while --  when my brain seemed to seize hold of the realization that the word "blanket" must come from the root word for "white" (Spanish: blanca/blanco;  French:  blanche/blanc).  When we put a blanket on a bed, are we white-washing it?  A blanket of snow seems so much more meaningful once you can think of it as "a whiteness of snow".

The next day, with my brain back in service to the rest of my body, I did a bit of etymology hunting.  It turns out that, indeed, blankets were originally made of all-white linen, there being few ways to dye cloth back in the day.   So, we'd say something like "throw that white thing on the bed", and "that white thing" became every other thing we'd cover ourselves with at night.   When he was very young, N-son (who didn't watch TV then) saw a red stuffed animal that someone told him was "Elmo", and from then on he named all stuffed animals "Elmo", including the beloved black-and-white panda bear he still has now that he's 21.  If Elmo can be a panda, just about anything linen can be a blanket.

"Linen", by the way, comes from the same word that gave us "line": ropes and thread were made from flax (Latin: linum). 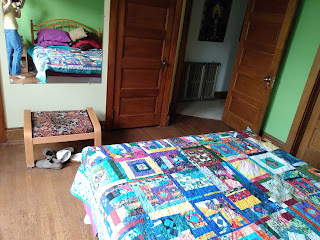 Maybe I was thinking about this because my sister recently gifted me with a quilt she'd made herself.   ("Quilt" comes to us from Middle English and before that Latin, culcita, the same root word that gives us cushion; indeed, "quilts" have moved up in the world, having originally been the mattresses/cushions we slept on rather than the puffy blankets we lie under).   This quilt is anything but white; it blankets the bed without being anything like a blank canvas.

Our mother, when Alzheimer's disease started affecting her, responded by labelling everything-but-everything in the house with helpful sticky notes.   My sisters and I found these everywhere as we helped my father clean up her thing after she died.  These notes were a testament to her powers of organization and attention to detail, as well as a sadly comical picture of the losing battle:  "a green necklace from our trip to Alaska; no longer in this box"; "Pieces of string too small to save".   My sister named her quilt in homage to that last sticky note; she describes it as a quilt made of "pieces of fabric too small to save".

It's the perfect quilt for a treasure hunt when my kids or grandkids come over.  Can you find . . . the super hero? an owl?  roses? horses?  butterflies? monkeys?  hearts?  And it's so cheery.  Cheery enough that when my body starts going to sleep but my brain is still partying, apparently that's where my brain goes to hang out.  Thanks, sister!