Life continues to be rich and full in the Miser Mom family.

Last week, N-son's old phone died the death of being loved far too enthusiastically.  His father believes in the necessity of working cell phones the way apocryphal mothers believe in the primacy of clean underwear.*  So N-son got a new cell phone, plus our family bought ourselves a back-up cellphone because . . . well.  Because. In the meanwhile, this week my husband brought N-son's old, enthusiastically-loved cell phone to a repair place to see whether it would be worth fixing.  The two tech-y Russian repair guys looked at the phone and sneered.  No, not worth fixing. So there's another electronic device headed for the universe of recycling.


* (True story:  A decade or so ago, when my husband was in the emergency room because of a broken neck, and the plastic surgeon was reattaching my husband's face to his skull, my husband was urging me to make sure his cell phone was okay.  It was, don't worry).

Continuing in the tech-break-ology theme:  J-son came back into town for a morning to deal with some administrative/legal stuff.  After my husband drove J-son back to his former foster mom's house, the little old 2001 Prius dashboard lit up with many, many red flashing warning signals.   Our usual mechanic said that the diagnostic codes were top-secret, and so we'd have to take the car to the Toyota dealer.  Fortunately, the Toyota dealer says that the problem is actually relatively minor:  there was carbon build-up in the throttle body.  I didn't know that my car even had something called a "throttle body", but that's now become one of my favorite phrases to say three times fast.

K-daughter texted me with lots of recipes that she's been making: Zucchini lasagna, turkey meat balls and organic lentil, quinoa spinach zucchini soup.  Man, I wish I could eat at her house! 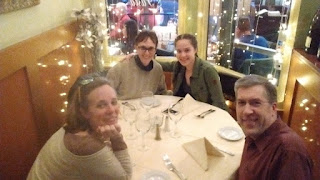 But the reason that I keep describing what happens to my kids and my husband without me involved is because I've spent the week in San Diego at the math meetings.   Toward the end of the week, though, I got to eat dinner with my sister, her husband, and one of my nieces**.  That was a lot of fun!

**My other niece was off at some 4-H event, completely out of contact.   She lost her cell-phone a while back, and has been cell-phone-less ever since.  My husband would freak.

And that's the news from our family, who continue to be prosperous in our adventures.  May you and yours be similarly wealthy.
Posted by Miser Mom at 6:53 AM