Life continues to be rich and full in the Miser Mom household.

Last week I wrote about N-son's performances and school news; what I didn't say is that he was on the verge of becoming a formal member of our church (a process which includes taking theology classes during Sunday school for several weeks, and then taking vows in front of the congregation).  I've included some pictures of the vows below.  My husband and I are super proud of him. 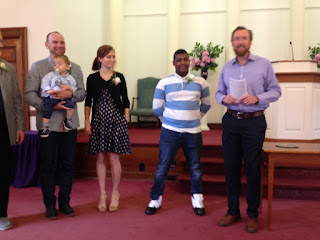 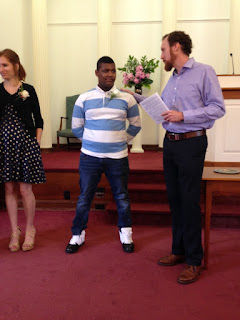 As for me, I've had a week of reconnecting.  Out of the blue I got an email from a pair of my former favorite students, from completely different classes, who bumped into each other in a bar, and then, as they said, "Pretty crazy that two people randomly meet in a bar, realize they went to fandm, and then the first person they talk about is you." 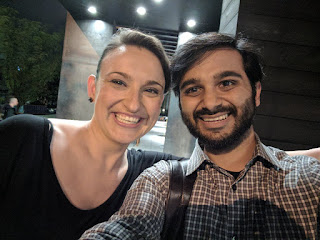 Friday morning, I had another former student visit for waffle brunch, and he and his wife told me they're expecting twins.  yay! I'm going to be a grandma again (of sorts)!   Then, On Friday and Saturday, then I went to my 30th college reunion and got to reconnect with a bunch of classmates (including my freshman roommates, who as freshmen looked very much like the pictures below, but less than half as old).  And tomorrow --- which I know is next week's news, but which thematically fits well with the "reconnecting" theme --- I'm going to another former student's wedding. 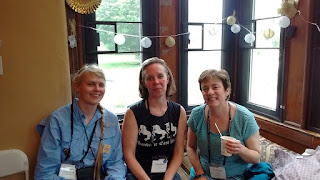 J-son has met a new friend named Rafael who has spent the night here, and who hosted J-son in return another night or two.  J-son is still enjoying boxing and hoping to make it a long-term profession.  We're still at odds trying to think about what might be the best plan for him next year -- his final year of high school, now that welding has fallen through.  Traditional classes don't hold much appeal for him, either, so we're glad for his social connections and boxing connections, and thinking hard about how these might help shape a more professional future for him.

My granddaughter Baby-A is obsessed with lawnmowers.  Every time we head out the back door, she mentions the lawnmower (and she does so over and over, in the way that only a two year old can).  Often, indoors she'll invoke the awesomeness  of the "mawnmower", as well.  She gives us a play-by-play description of her uncles N-son and J-son when they're mowing the lawn.  So, by now, all six of us who are living here in my home get the giggles whenever we think of lawnmowers.

My husband went to Philadelphia for his weekly "Tuesdays with Toomey" protest, and he went to New York City where he surrendered his passport to the Russian consulate; he'll pick up his passport together with a visa from them next week.  The bike trip from Odessa to Finland is getting closer and closer, and we're all getting more and more excited.

I've been reading through many old letters my grandfather wrote, trying to figure out which ones to save for posterity.  He was an avid and encouraging letter writer, and it's lots of fun to see history through his eyes.  He wrote so many letters I don't want to try to save them all.  But I thought I'd rescue this one "PS" he sent to my mom and dad in November of 1965, a few months after he'd been informed that my mom was pregnant (with me!).

What charge is placed against an elephant who lives in a messy house?
Ans;  Trunk and disorderly.  Hurry up and produce me an heir so that she-she-them may grow up and provide Gramps with a new generation of proper mentality at least until age 6, to appreciate his wonderful gags.

And indeed, I do appreciate his gags, even at almost ten-times-age-6.
Posted by Miser Mom at 7:06 PM