N-son leads the family in having noteworthy news this week.  Firstly, he had an end-of-year squash banquet (see the photo, below, of him chatting with K-daughter at this event); 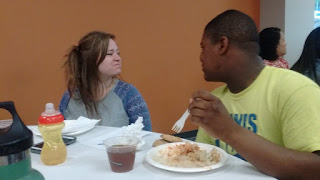 secondly, he played drums for a kick-butt pair of songs at an open-mic night at a nearby restaurant (see the photo of him and the other musicians breaking down the drum set afterward). 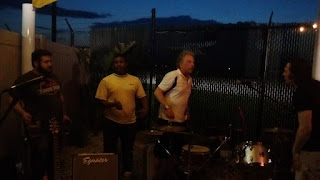 And perhaps happiest of all, he found out he's making it into next year's all day culinary arts program through his high school.  Whoop!  That's fantastic news indeed!

Speaking of K-daughter, she's gotten a part-time job at our local Y, which is another cause for celebration around here.  She's looking for even more substantial jobs, and has gotten a few good nibbles.  We're all optimistic.  I'm really enjoying the many opportunities I'm getting to spend time with my granddaughter Baby-A.

J-son sparred again this week, and again won his sparring match.  Also, he updated his Facebook profile photo.  This isn't the kind of thing I'd normally consider newsworthy, but his new photo (taken by a friend of his) is a really vivid illustration of how much he's grown -- metaphorically and literally -- since he joined our family.

I'm loving the "after" and "before" pictures I included below.  J-son doesn't so much love the "before" pictures -- but that's really the point, isn't it?  (My sister will probably recognize the boxing-glove necklace he's wearing, which she gave him for Christmas.  He loves that bit of bling).

My husband is riding home from his latest 100-mile bike ride even as I type this blog post.  He's getting more and more excited about his trip to Russia.  Earlier this week, he took the train to New York City to visit the Russian consulate, in hopes of getting his visa.  Alas, he didn't have the right paperwork and was sent home to try again -- so he's training both athletically and bureaucratically now.   Earlier in the week, he attended his regular "Tuesdays with Toomey" protest (this week's theme: incarceration and race).

As for me, my husband and I both voted in the under-appreciated odd-year primary races, which makes me feel highly virtuous.  Yay, civic duty!  And as May grows old,  I'm doing my best to transition into summer mode.  For me, "summer" means three things:
Posted by Miser Mom at 6:04 PM