I just can't pear it anymore!

Last summer, I wrote about how tricky it is to harvest pears; they're finicky about ripening.  Our pear tree itself has grown massive, shading our garden, dangling its pears several stories above our heads, and producing fruit that alternates between hard green rocks and brown slime balls. 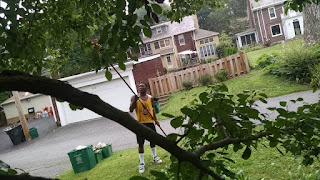 Since we had other tree issues as well -- our maple tree (the one that holds our adored tree house) has branches that have been scraping the roof of the house -- we got a few estimates for tree trimming (maple) and tree removal (pear).  I mean, when I got this tree, I *loved* the idea of a pear tree in the abstract, but the reality has been less than romantic nine-ladies-dancing, in spite of the fact that my true love gave it to me.

Tree work is expensive.  I wasn't too surprised when the four-figure estimates started rolling in. We found a tree company that we liked and offered them the job . . . and then waited until they could work us into their queue.  Estimated wait time: four to five weeks.

And then we lucked out.  If you look at the very right edge of the picture above, across the alley you'll see the bark of a tree that belongs to our neighbors.  Or rather, I should say belonged, because the tree died in place, and the neighbors decided they needed to take it down.  Yesterday, I woke up to the sound of heavy machinery (cranes, chipper/shredders, and chain saws), and by the end of the day their tree was safely horizontal instead of dangerously vertical. 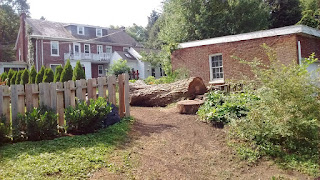 But while the tree crew was out there, a whole bunch of other neighbors (including me) started mobbing the crew, asking them for quotes on our own trees.  ("As long as you're here, how much would it be . . . ?").    And the crew very gladly took down a bunch of other trees, as well as trimming quite a few more.

Tree crews are just really fun to watch.  There are people high up in the air, in cranes, wielding chainsaws and ropes with pulleys, yelling lumber-jack-y things at one another.  The limbs come down bit by bit, sometimes dropping directly down, sometimes being lowered by ropes attached to pulleys that swing around other limbs.

Down on the ground are the kinds of trucks that my sisters and I loved to play with (in Tonka versions) in our own dirt piles, when we were kids. My favorite was a little beast that looked like a cross between a bull-dozer and a pair of giant salad tongs:  its job was to troll across the yard, scoop up branches, and haul them back to the chipper-shredder.

And just like painting a room, the real work in tree trimming and cutting isn't in the painting or trimming; it's in the set-up and clean up.   Getting all these amazing machines in place must be an amazing feat of scheduling in the first place.

Which is why I wasn't too surprised at the high price estimate when we started scoping out tree work, and why I jumped at the chance to grab this crew while they were already set up -- we'll end up paying only about half of what we'd have paid if the other crew had come around.  It's not everyday you can find a way to spend $500 less than you'd planned, just by running out in your back yard and waving your arms at workers in hard hats.

So the pear tree came down, and by the time I grabbed my camera, it was already being winched along the ground to the chipper/shredder.  In this picture below, the top of the pear tree looks like a bush just beyond the garage. 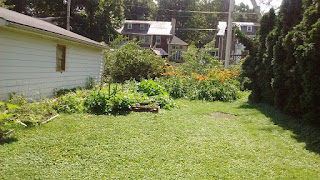 But you can see it's a bush on the move (thanks to the winch). 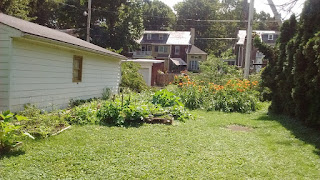 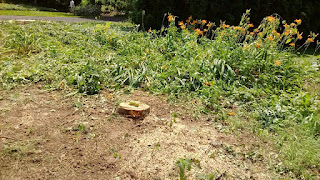 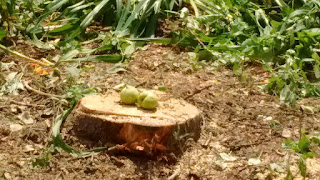 The whole loss-aversion thing that we humans carry around with us makes me feel a bit sad to see the tree go. I mean, it was a living thing, one that I planted myself, and now I'm responsible for killing it.  Taking down this leafy green giant is not like what my neighbors did, taking down dead or dying trees.

But what's left behind is an open, sunny place that my garden will be able to expand into.  And the sunshine, which my vegetables yearn for, makes me happy.