The first time of doing anything new can be exciting, but it can also be darned intimidating.  I'm thinking, for example, of a student who came to my home for lunch last month and who said, sort of wistfully, "Yeah, someday I'd like to learn to bake bread."  Even after I wrote down a recipe, she kept saying, "Someday I'll learn . . . "  so I walked her into my kitchen and handed her a bowl.

And in the same way, doing something for a second, third, or nth time becomes a snap.  For example, this weekend I spent a half hour getting my tomatoes and peppers started.  I knew from past experience that the part I dislike most about seed-starting is gathering supplies from the basement and garage, so I tasked N-son with carrying things while I finished up some dishes.  From the basement: two-dozen pint jars and one-dozen cup jars, plus the shoe box of seeds.  From the garage: the potting soil and the tarp to keep the table clean. (It's so nice to know what I'm doing now well enough that I can delegate to others!  I can't delegate well when I'm still making stuff up as I'm going along.)  I got the ladle and funnel myself.  And, voila!  I was ready to start my seeds.
I already had potting soil and seeds from a previous year.  I already had canning jars from . . . well, from being a little nutso about loving canning jars.  This year the one new thing I'm trying new is to use canning jar lids instead of a dry cleaner bag or clear plastic tarp to keep moisture in until things start sprouting.  I'm crossing my fingers that the glass on the side of the jars lets enough light in to tell the seeds to wake up.  If this doesn't work, I'll cry for my dead seeds, and then go back to plastic tarp next year. 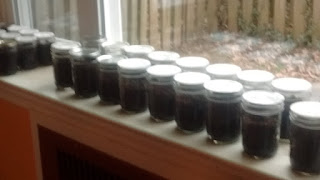 And, half-an-hour later, all the seeds were in jars, the tarp had been shaken out outside, the supplies were put away, and any mess was cleaned up.  All that was left on the table was a set of flowers I'd planted years ago.  More past-me making the life of now-me a little easier and prettier. 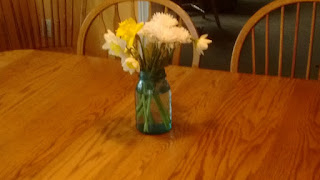 Email ThisBlogThis!Share to TwitterShare to FacebookShare to Pinterest
Labels: canning jar fetish, organizing, using what we have