What to love about my ugly basement

The basement, which my husband and I sort-of cleaned out a bit after Christmas, is much less full of junk than it used to be. But still, it is not a lovely space.  At least, not lovely in a "home beautiful" sense. 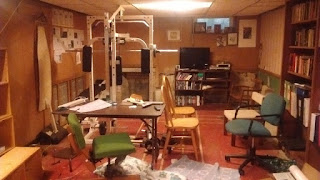 On the other hand, Aristotle was pretty clear that every object has both form and function, and if the form of our basement is sort of . . . ugly . . . , even so, in function it turns out to be a wonderful place.    In particular, it is a wonderful place for my sons.

For a bunch of years now we've struggled with the whole teenage-boy-friendship thing.  It's partly a side-effect of their living in the realm of a Miser Mom:  we don't have video games, we don't have soda or snacky chips.  There's the impression that there's nothing here that outsiders might find "fun".  Ergo, the boys don't invite their friends here.

Ooh, not to mention they have a mom who uses words like "ergo".  Geeky.

One of the very cool kids that J-son hangs with can boast a "shack":  his parents cleared out a giant shed in the back yard, added heaters and electric lights and X-Box, and turned the place into a parent-free oasis.  It is the hangout place for young men of a certain age.  J-son has spent a lot of time there, sort of sucking up to the cooler kids who hang there.

***
Meanwhile, back at Chez Miser Mom, I do my frugal quasi-minimalist thing.  I store jars of food; I yard sale; I buy things on Craigslist.  In fact, a few summers back, I bought a weight set on Craigslist, for the fairly low price of (if I remember correctly) $150.  It's a pretty thorough set-up, and I've used this machine off-and-on a lot.

Now that N-son and J-son have been doing boxing workouts regularly, they've started to use the weights, too -- particularly J-son (who alternates lifting weights and asking me to feel whether his biceps have gotten bigger).  (To which the answer is "yes"; he's ripped, and keeps getting ripped-er.). 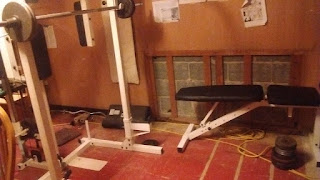 Somehow the boys in the shack found out about the weight set.  Compared to N-son and J-son, they're sort of scrawny kids, but they like the idea of getting pumped.  A few of them have started coming over to work out here occasionally.  They profess admiration for J-son's boxing skills, and I'm guessing that he enjoys showing off his strength for them, too.

And so, all of a sudden, we have a cool place for friends here at the house.  It's not cool in the same way the other houses are cool, but it's cool in a way that really has integrity with the way we live our own lives.  I'm happy about this for so many reasons -- not just because J-son finally feels he can bring friends over to the house, but also because he's getting to see that you don't have to imitate everyone else's possessions.  You can do your own thing, and own your own things, and still hang with the cool kids.