Out with the goat; in with the monkey!

In honor of that, last night my family had one of our much-loved Special Dinners.  K-daughter is allergic to soy sauce, so the only traditional Asian food we had was actually an Asian beverage:  a sweet soda-like thing made with aloe pulp, bought by our host daughter Y.

Instead, we had the "Monkey Dinner". 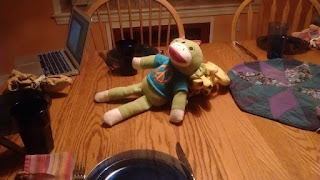 I didn't take many photos, aside from Baby-A's toy monkey, which decorated the table.  The menu included


We played "Hey Hey, We're The Monkeys" several times (basically, until my husband begged us to stop), and at dinner we all described things we'd done recently that began with the letter "M".  The dinner was fab -- more fun than a barrel of . . . well, you know.
Posted by Miser Mom at 3:05 AM