Since I'm going to write about something as ridiculous as edible deodorant, I might as well start off with the sublime:  the final verse from one of my favorite poems (Edna St. Vincent Millay's Travel).  After two verses of describing the sight and sound of trains, she writes,


My heart is warm with the friends I make,
And better friends I'll not be knowing,
But there isn't a train I wouldn't take,
No matter where it's going.

That.
I love getting on a plane, getting on a train, getting in a car, and going anywhere.  I've been really fortunate that the work that I'm doing lately has been attracting enough attention that I've gotten to go on all sorts of amazing trips, and that I'll get to keep traveling even more.
I'm getting more and more minimalist these days, and traveling (where I have to carry everything with me) seems to be the perfect place to experiment with the question of "how much do I really need?"  Likewise, I've been trying to figure out how to combine all these trips with my increasing aversion to trash (so counter-cultural).

Which is why, on one of my recent trips, I finally ditched my last container of commercially-prepared deodorant.  It had been in my travel toiletries bag for a year or so; when I used it one morning at a conference in Seattle, I got one of those white smears on my clothes (yuck) and I decided to get rid of it once and for all.  What works at home will work on the road -- I just needed to find a good pair of small containers. 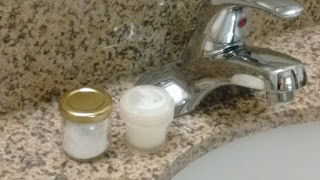 People who read enough eco/frugal blogs will have seen lots of recipes for homemade deodorant, most of which involving mixing stuff together.  I don't actually mix anything: I dab.  Container 1 is the oil*; container 2 is the baking soda.  I dab oil into into my pits first, then add the baking soda the second.


(*For several years, I used only coconut oil, because that's what most of the eco/frugal recipes call for.  Once, K-daughter actually borrowed my "deodorant" coconut oil for cooking up a recipe she was making; I still think that's hilarious!  But recently I've realized I can actually use just any old lotion;  it's a great way to use up those weird extra bottles we seem to have lying around the house.)

The only disadvantage to this system -- that I've found at least -- is that if I have shaving nicks, the baking soda burns.  For me, that's another reason not to mix ingredients; I can put oil only on the nicked sections, promoting healing.
At any rate, getting rid of that giant container of commercial deodorant was the latest in a series of "don't need this", and it allowed me to make myself a smaller travel bag.  I happened to have a bunch of very long zippers saved for "someday", and also a pants leg from my sister's jeans (gifted me for a braided denim rug that is also years in the future), and I combined these to make a long, thin, foldable bag that makes me think of a snake.  My travel toiletries snake.

there isn't a snake I wouldn't take,
no matter where I'm going.

Email ThisBlogThis!Share to TwitterShare to FacebookShare to Pinterest
Labels: organizing, trash, using what we have