By the seat of my (husband's) pants

Because . . .  patching a hole in the seat of the jeans is faster than buying a new pair. 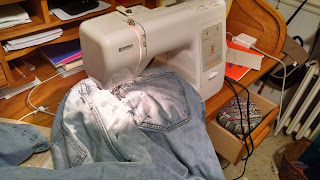 (Cheaper, too, of course).   The seat ripped out right before a trip that my husband took to New York, and I got the pants fixed and back onto his body in time for the train, with nary a trip to a store needed.

But a butt fix is faster only if the jeans are still mostly good --- that is, only provided the jeans aren't so old and threadbare that I'm not committing myself to continually sewing patches on top of patches.  Alas, my husband's jeans are getting to the dangerously threadbare stage.  Eventually, I'll declare them defunct, remove the solid parts for patching future jeans, and toss the rest.  (I still haven't found a local place that recycles rags -- our local Goodwill says they toss them in the trash).

Oh, but ripped jeans can be one of the most comfortable pairs of pants to wear, can't they?   My sister, who lives in California, tells me she realized she needed to go shopping for new jeans finally when a fire evacuation caused her to pack up and leave her house for a few days, and she realized while packing that every single pair of jeans she had was ripped.  Comfy, but torn.

So, for  now, I patch his jeans -- the seat, the knees.  The end of the jeans is imminent, so this is merely a stitch in time that buys more time.
Posted by Miser Mom at 2:51 AM

Email ThisBlogThis!Share to TwitterShare to FacebookShare to Pinterest
Labels: clothes