It was a year ago today that my husband and I jumped into the waters of the Ohio River at 7 a.m. in the morning, with both an entire IronMan triathlon and about a gazillion uncertainties ahead of us.  In the year or two before we jumped into that river together, it seemed like the IronMan was just about all we could talk about with each other -- my husband would describe his swimming lessons; I'd fret about hills; we planned and re-planned our training regimens.  It's been nice to have other topics of conversation since.

But the fretting and planning and training -- even more than the actual race itself -- has clearly changed us.  Probably for the better. 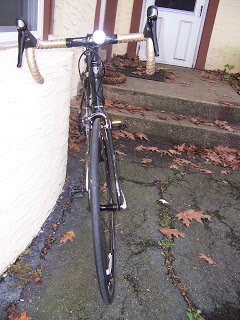 For one thing, it's given us each new skills.  Back in November of 2012, I splurged on a bike that I named "the SPDM" (the Sudden Painful Death Machine), a name that I gave it as a challenge to all my fears.  Although I'd ridden bikes in the past, I was distinctly uncomfortable on this lean, almost menacing (but beautiful) machine.   Lo these many months later, the SPDM is now my faithful companion, transporting me to yard sales and to the market and other local stores, as well as taking me on training rides with friends.  I can shift; I can corner; I can zoom down hills; I can ride comfortably alongside traffic.

My husband was already a bike-o-phile, but when we started training he couldn't even swim the length of the pool safely.  He took lessons at the local Y and then practiced the heck out of swimming, and he's now as comfortable in the water as I am on my bike.  So both of us are now able to do things that before the IronMan seemed just about impossible.

But even beyond skills, all that training and practicing changed our attitudes.  It's not just that I *can* bike and he *can* swim, it's that we have both fallen in love with this new side of our life.  A year later with no big races in sight to motivate us, my husband still heads to the Y for a thousand yards or two of swimming just about every other day.  I still jump on the SPDM whenever I have a trip longer than a quarter mile, and I just love the chance to be out in the open air.  I've become one of those bike people.  I walk my bike with me through the hardware store when I shop there; I twitch when I'm stuck in a car in city traffic, imagining how I'd just zip around the congestion on my bike; I explain to the bank tellers that, no, it's not too hot to ride -- in fact, it's cooler on a bike because of the breeze than it is in a car that's like a rolling greenhouse.  I've not only picked up the skills; I've picked up the attitude.

Training for that IronMan has also, obviously, changed our spending: both our money spending and our time spending.  We've blown some big bucks on bicycles, buying not only my bike but also the boys' new bikes.  We've become members of the Y, paying monthly dues.  We've bought accessories: bike locks, bike lights, more bike locks when the boys lost their first ones, clothes, and such.  But we've also cut spending in other areas -- particularly on our car, since we're pretty contentedly down to one 15-year-old old car now, even with two teenage boys and a 22-year-old host daughter in the house.  In fact, we often go for days without anyone starting the car up, but it's hard to think of a day when the family bike rack doesn't get a bit of rearranging.

Tscha.  All this navel-gazing.  The point is, there are two things that I still marvel at regarding that giant event.  One is that, after I got a flat tire two miles into the bike ride (only 2 miles!! with 110 to go!!!), by some miracle the new tire held air and I managed to finish the entire event, instead of having to go through the hell of training for another summer and trying again a year later.  I still look back at that moment of near despair and feel incredible relief and gratitude at how it all ended up.

And the other thing I marvel at is that, my plan to become a bike rider worked -- and then some.  I really did this triathlon because I hoped that by going to extremes -- by getting myself to the point where I could ride my bike 112 miles in one day (never even mind the hour swim beforehand or the 26.2 miles on foot afterward) -- that I'd finally be comfortable substituting my bike for my car on errands that I'd do around town.  It was a bizarre plan for moving closer to a low-waste lifestyle.  I didn't have any idea that I'd want to be on the bike just for the fun of it; that I'd pester my friend Andy to ride through the Amish farmland with me; that I'd become a bike ambassador at the pet store and at yard sales.

I just had no idea how far the triathlon would end up taking me.
Posted by Miser Mom at 2:42 AM