Here is one of those rare joys of sabbaticals that professors seldom confess in public:  we get to fix our toilets at our leisure.  Oh, yeah, baby.

On Saturday morning, N-son came into my room and declared cryptically, "the broken toilet seat isn't my fault!  All I did was . . . "  . . . and then he continued into an incomprehensible something-or-other of events recently past.  The thrust was, the toilet seat in our most-used bathroom seems to have fallen off the toilet.  Nobody's fault.

In fact, I blame the manufacturer.  About seven or eight years ago, we replaced all four of our toilets with low-flow varieties.  I appreciate the lower water usage, but the hardware has left me unimpressed.  Cheap plastic hinges.  The paint on the seats has worn off a bit, leaving ugly splotches   (and really, splotchy toilet seats are . . . unappealing).   So when N-son declared the broken toilet seat wasn't his fault, I was ready to give him credit for telling the truth.

And yet, a broken toilet seat. At this point, we morph from a pure Home-Repair story into a Joy-of-Sabbatical story, because in everything that follows, the lack of urgency plays a starring role.  On this particular Saturday I had no grading; I had no committee work; I had no looming syllabus deadlines.  The day was mine to tinker with toilets.  I unscrewed the seat and lid from the porcelain everything-else, tossed the seat in my backpack, and biked myself over to the hardware store.  Could the nice gentleman in the plumbing aisle please direct me to the replacement toilet seat hinges?

In fact, no, he could not.  "You'll have to replace the whole seat assembly," he told me, pointing toward the racks of $50+ toilet seats displayed in their full gaping glory.  I gently argued back:  I don't want a new toilet seat; this one is fine (in a splotchy sort of way). All I need is a new hinge.  My hardware helper shrugged his shoulders and suggested a nearby plumbing supply store.  "But they close at 1:00 on Saturdays."

Well, fine, I'm on sabbatical.   I don't have to buy an expensive seat right now. I made a few other hardware purchases that I'd been planning on, and toddled my bike homeward to do other household repairs.  The hour of 1:00 came and went, and I decided that at least temporarily, we could place the wooden seat on the porcelain rim, without attaching it.  Sub-optimal, but temporarily tractable.

I tried buying toilet seat hinges online, but could only find a different version of cheap plastic hinges -- not only cheap plastic, but also versions that would require drilling new holes in my splotchy seats.  So I opted to wait until the local plumbing supply stores opened up.

Monday morning rolled around. Thanks to the joys of sabbatical-dom, I decided I could temporarily delay writing up the proof of Theorem 1 of my latest paper.  Instead, I stuck the errant toilet seat back into my backpack, jumped back on my bike, and pedaled on over to the nearest plumbing supply store -- not un-coincidentally, the very place our family bought the four toilets that are now beginning to fall apart on us.

The parts counter of a plumbing supply store is an interesting place.  I was the only woman there; the other people at the counter were all guys in various versions of plumbing-pro t-shirts and work pants.  I was the only bicyclist there, too.  Conversations hushed when I walked in.  Awkwardness.  I mentioned to one of the guys, "my bike probably gets better mileage than your pickup, but I can't fit as much in the trunk."  He didn't make eye contact.  More awkwardness.

The place itself looked like a bar, complete with stools and a counter.  Behind the counter there was a poster in a style that reminded me of Nazi/Soviet propaganda, one that had an Ayn Rand feel to it.  A tall, muscular man was standing nobly astride the top of a hill, with adoring people below and around him, their faces at his foot level gazing up gratefully at him.  The caption read, "Plumbers protect the health and safety of our country".  I wanted to say, Look at me!  I've got a toilet seat in my backpack!

One by one, the other plumbers made their requests at the counter, still avoiding eye contact with me.  When it was my turn, I pulled my toilet seat out of my bag.  "I need toilet seat hinges," I told the clerk.  "They don't make those," he answered.  "You need to buy the whole seat.  Don't blame us; it's the manufacturer."

I was back to where we'd started -- the not-my-fault version of the story.  But danged if I was going to spend $50 or more on this project, especially if the three other seats were bound to follow.

As I was leaving, one of the plumbers muttered under his breath, "Restoration Hardware dot com". He didn't look at me as he said it, but I appreciated his rebel advice.  Still, I discovered the only hinges that RH.com had were for cabinets, not toilets.  Too bad. 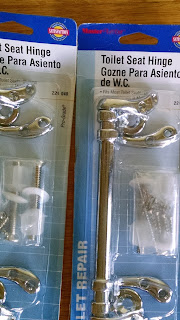 I decided to try a new version of my internet search, this time with more metal involved:  "bronze toilet hinges".  This led me quickly to the slightly cheaper, but still metal, "chrome toilet hinges".  I ordered two sets (because, y'know, when the next toilet seat happens to be not-somebody-else's-fault . . . ) for $9 each.  In the meanwhile, my husband had the brilliant idea that we could bring the seat from the basement toilet, the one we seldom use, up to the often-used-toilet, and have a working seat right where we need it, moving the seat-needing-fixing to Siberia.  Brilliant.  I'm not sure why I didn't think of it myself several days before.

In Spanish, goza means "pleasure".  Apparently, that's not far removed from "hinges", goznes.  Happiness is a hinge that swings back and forth.  My new toilet seat hinges arrived like magic through the mail only a day or two after I ordered them.  I did have to drill a few holes, fix a few splotches.  But it's okay, I'm on sabbatical, so I have time.


And the proof of Theorem 1 turned out  beautiful, too.
Posted by Miser Mom at 2:42 AM