Three gifts and a moral

Gift 1.  A gift from my boys to their grandpa (my dad):  wax covered pinecones to use as fire-starters in his fireplace. 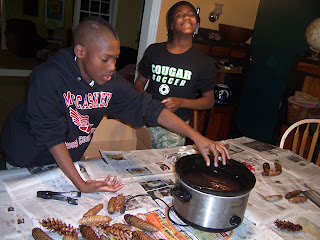 This is an annual tradition.  One year, I managed to get big pinecones in March while I was traveling, so later that summer I could melt wax in my homemade solar cooker.  This year, we stuck with local pinecones that ripen (if that's the correct word) in November.  We covered the dining room table with newspaper, melted the wax in the crock pot, put on some Christmas music, and had a pinecone fest. 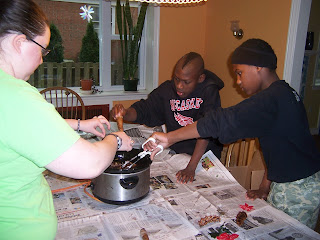 The wax, I got from yard-sale-purchased candles.  The fact that candles are so cheap and so abundant at yard sales tells me that I should never buy these for someone as a gift.   Except, of course, unless we're using them to make waxed pine cones. 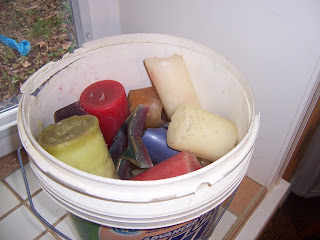 Gift 2.  Next year's gift to my kids, nephew, and nieces:  family heirlooms.


I've been storing "keepsakes" -- an old christening gown, napkins with hand-tatted lace edges, my grandmother's veil, and such -- for almost two decades now.   They're stashed away carefully so they won't get damaged, and they're stashed away at all because I figured someday the next generation would want them.

Well, I'm done with stashing.  It's time to let the next generation in on the fun of figuring out what to do with delicate-but-basically-useless relics of our family history.  I'm going to talk to a curator friend of mine about how to best present them (should we frame some of these?  put the gown on a baby-doll and stand her in a glass case?  store the napkins in a special box?).*   So there will be some expense on preservation/display.  And I'll do a bit of curatorial work, writing up some information about the pieces and the people they belonged to.  But mainly, there will be a general gleeful purging of my own storage nooks.

[*Suggestions from anyone out there are VERY MUCH WELCOME.]


Okay, I'm not giving them grumbling.  But I'm going to grumble anyway.  I got an email message on the day after Thanksgiving from my husband's army unit about a family holiday party coming up in December:


Remember....Santa will visit and give each child a small gift provided by the parents, so we are asked to bring a $10 wrapped gift with a tag clearly showing the child’s full name, soldier's full name and unit to help make it easier for Santa to give out.  The wrapped gifts should be turned in to the Family Readiness Group (FRG) on the drill floor . . .

This message has two big problems with it.  One:  I seldom spend as much as $10 on my kids.  Lest you pity them, J-son is avid about playing with his latest birthday present, a giant K-nex set that makes towers that reach to the ceiling, $4 at a yard sale.  N-son won't put down his own recent birthday present, an electronic game toy, $1.  So $10 for a store-bought gift is right out.  There's no way they'd like it even half as much as the inexpensive-yet-quality stuff I buy them from a yard sale.

Two, and even more important:  shopping season is OVER for me.  I'm not going anywhere near a mall or toystore until after February unless it's an emergency, and an Army Santa is not an emergency.

Instead, I ransacked my storage areas.  I found a stash of fake-fur from long ago teddy bear projects.  I'd been saving this material, hoping someday to make giant furry blankets (a family tradition -- my mom made one for me when I went off to college), but good fake fur is much harder to get now that so few people sew.  So I decided to use some of this stash to make two furry pillowcases.  (This choice is partly motivated by the recent teenage-boy-tendency to lose their pillowcases and sleep on the bare pillow each night.  What's up with that?  Yuck!  I'm hoping this will help curb that bad habit).  Luckily for me I happened to have fur in the boys' favorite spiderman/bionicles decorating colors -- so, yes, the boys are black and blue. (!)  I lined each pillow case with satiny fabric in a contrasting color.


Total time: 1 hour (about the same as going to a store this time of year, I'm guessing from complete ignorance).  Total cost: $0.


& a Moral:  Sometimes when you're thinking about giving gifts, it's better to start by thinking "what do I already have around me?" than to think, "what could I go out and buy?".   Clean out your yard and your house, not your wallet.  Heh.
Posted by Miser Mom at 3:11 AM

Email ThisBlogThis!Share to TwitterShare to FacebookShare to Pinterest
Labels: using what we have