How to take a child to the opera

If technology (which I'm on a two-week rant against) is dangerous for us because it's easy to get sucked into and hard to quit, what's the opposite?

How about opera?  Opera is hard to get used to, and (unless you had a really good parent/teacher/mentor to introduce you to the genre), really really easy to walk away from.  So it probably goes without saying that as much as I hate (love HATE) my cell phones, I love (love LOVE) opera.

Taking a kid to an opera doesn't sound like a miserly experience, does it?

Okay, it's not.  Operas are pricey, and they're an acquired taste at best.  But if you're GOING to take a kid to an opera anyway, teaching a kid to make the most of that expensive experience is definitely the Miser Mom way to go.  If opera's not your bag, I'm sure you can substitute your own favorite expensive hobby in here and figure out similar ways to prepare the kid for the exquisite experience of luxury that only an adult could love.

I tell the story of the opera from the end first: 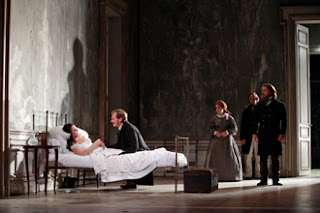 La Traviata is a story about a beautiful woman named Violetta, and you know what happens to her at the end?  She dies!

Then I back up and tell a bit more.


La Traviata is a story about a beautiful woman named Violetta, and at the end of the opera, she's sick but says she's feeling so much better she wants to get up and go to church.  And then you know what happens to her?  She dies!

Then I back up and tell a bit more.


La Traviata is a story about a beautiful woman named Violetta.  Her boyfriend Alfredo leaves her.  At the end, he comes back because she's sick, and that makes her feel so much better she says she wants to get up and go to church.  But you know what happens to her then?  She dies!

I also play the favorite arias from the opera as going-to-bed music for about a month, so the kids get used to it.  If N-son can watch Ice Age over and over and over again (and he does), then he's not about to get over-weary of the humming chorus from Madame Butterfly.  Quite the opposite -- it becomes a thrill to hear that the people on the stage know that song, too!

In opera, the first violin comes out to tune up the orchestra.  I tell the kids (and this is true) that THAT is my favorite sound in the whole entire world.  I could listen to an orchestra tuning together all evening.  I'm not the only one who feels like this.  Not at all.

There's an intermission when we get to go get a soda (gasp!), and then we come back in for more.  When the lights blink, that's when we know it's time to go back in.  Cool. 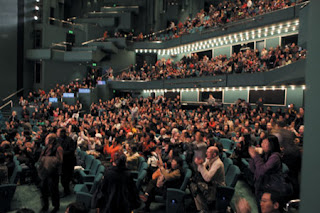 At the end of the opera, clapping goes on forever and ever. If you stick your fingers in your ears, the applause sounds like rain and thunder -- likewise very cool.  We love that.

Give the kids a safety valve.

There is no fidgeting during an opera.  None at all.  But the kids are allowed to fall asleep quietly, provided they don't wiggle or snore.  One of my daughters once told her friends, "Carmen was so loud you could hear the music even when you were asleep!"

Another, even better way to get through the occasional boring parts is to see how long you can hold your breath.  (No loud explosions or heavy breathing at the end).  The holding-the-breath trick has been a staple in generations of my family.  Try it during a committee meeting sometime -- you'll see why we love it.

There is no talking while the music is playing (which is pretty much the whole time).  But kids are allowed to ask a very quick question while the audience is clapping.  My kid's favorite question, which they usually get in right after the very first aria of the very first act, is "Is she dead yet?"

When they ask that question, I know the kids are hooked.  They're opera lovers, holding their breaths, waiting for more.

No, baby, she's not dead yet.  Keep watching.