A Tale of Two Banjos

Any professor can tell you that a tenure decision is the ultimate pass/fail exam.  Six or seven years after a school hires you, a committee gets together and makes a decision about your fate: if they say "no", you're fired; if they say "yes", you've got a job for life.  For obvious reasons, Tenure Decision Day is a honking big deal.  There's not a traditional way to celebrate (or mourn, for that matter).  For me, I celebrated the day I got tenure -- November 18, 1998, in case you're wondering -- by going out and buying a banjo.

Before I bought my banjo, the only musical instrument I knew how to play was the radio (I'm a darned good radio player, if I do say so myself!).  For my first non-radio instrument, I chose the banjo because I like bluegrass, and because I wanted an instrument that had to satisfy two criteria:

For a year or so, after I got my banjo, I played stupid little songs every day. I was really bad (although my dog and my kids grooved to "Go Tell Aunt Rhody" and "Frere Jacque"). Eventually, I got to the point I could play semi-decent little songs like "Cripple Creek". Then I started playing with a really good player (a groundskeeper at my college named Boots), and I got to the point where I could play truly decent little songs, plus a few indecent ones. (Hello, "Dueling Banjos"!) Then I bought my second banjo.

Banjo number 1 cost me $600.  It was new, from one of those mall-side music stores.  It was probably really worth only half that (on the market, that is.  Obviously, to me  it was symbolically much more important).  It was a beginner's banjo, light and plinky, serviceable.  I couldn't have told you why, but it was nothing a professional would have played.  Worked for me, since I wasn't even close to being a professional.

Banjo number 2 cost . . . the same:  $600.  I bought it used, with Boots' help, from a musician who'd decided to pass it along.  It's a beautiful looking, beautiful sounding, heavy banjo that was probably worth twice what I paid for it.  It was a much, much better instrument than the first one I got, and yet I paid just the same for it. 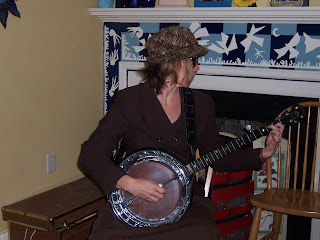 When I bought my first banjo, it wasn't just my fingers that couldn't do the music.  It was also my ears:  I honestly couldn't tell the diference in sound between one banjo and another.  (And I bought it on Tenure Decision Day, so I didn't care -- I just wanted to get a banjo!)   Over the course of the several years between the two instruments, after playing banjo nearly every day, I learned not only how to make a few chords and a whole bunch of "rolls", but also how to appreciate the beast I was holding. 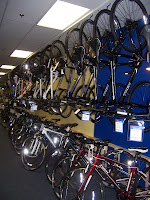 I think about those two banjos a lot as I consider getting a new bicycle for my upcoming adventures.  I test-rode a bunch of different bikes this past weekend, ranging in price from $700 to $2000.  And I could sort of tell they felt different, but I honestly couldn't have told you which was "best".  I know it's going to take miles and miles (furlongs?  centuries?) before I can feel and understand the difference between the machines.

This time, I'm not running out and buying something right away.  A friend has offered to loan me her bike (yay for the Mutual Friend Account!)   I'm going to try to use it to put in a bunch of miles so I can build up my legs and my sense of how the bike connects me to the road.  Then I'm going to go and test-ride those various bikes again.