Today is a 10-year anniversary of sorts.  I've been debating writing about it -- on the one hand, it'd be easy to turn this into a "gee, I'm so amazing" kind of post -- which isn't really the point I want to make.  Ten years ago today, I donated a kidney to a coworker of mine.  It was my good deed for the year; after that, I was allowed to go around stealing candy from small children, tossing my trash in my neighbors' bin, and telling people "let's have dinner" without ever really meaning it.

Can I write about this without crowing?  Should I write about it at all?  If not today, it's hard to say when.  And I don't actually want to crow about it, because the truth is, there are a lot of people out there waiting for kidneys, and the other truth is, donating a kidney is really . . . not . . . that big a deal for the donor.  So for the purposes of giving you a peek into how I stumbled into this adventure, I thought I'd share my experience.  (I should warn you that there's a photo of a kidney having an out-of-body experience below; if you don't like those kind of pictures, you probably don't want to read this all the way to the end.

Chris (short for Christine) is a coworker of mine who works in another building on my campus.  In December of 2001, our employee newsletter ran a human interest story on her, saying that she was going to need a kidney transplant and needed a donor. That was my first indication that a living person could offer up a kidney.  (I'm a mathematician, not a biologist, and I didn't even realize we have two of these babies rattling around inside of us).

I read that she needed a new kidney and figured, "I keep bragging about how insanely healthy I am.  If *I* am not willing to volunteer to do this, who on earth would?".  I say this to show you how incredibly full I am of myself, because in fact, eventually I discovered about 5 people offered to be tested for a match.

Before I stepped forward, I did a bit of research.  First I went to the Johns Hopkins transplant website.  Not surprisingly, they were all aglow about how great living donation is.  Modern surgery techniques are much less invasive than in the past, there are amazingly high rates of success, blah blah blah.  I wasn't sure I trusted these guys to be looking out for the lowly donor, so I tried to think about who might be pessimistic about donation.  Ah!  My insurance company!  If anyone would have a cover-your-butt approach to donation, it would be them.

So I called my health insurance company and asked about what would happen to my health coverage if I just, say, happened to give one of my major organs to someone else.  To my surprise, they sort of yawned and shrugged their shoulders and said, "no biggie."

Next stop was family.  My husband was immediately supportive (he was faking it; he was a bigger wreck than anyone when the actual surgery was taking place).  My favorite line came from my daughter, who said, "Oh, guh-ROSS!  I do NOT want to be there!"  I promised her she didn't have to be around then.

Then I went to Chris.  And she took me to her doctor.  Between January and June, there was just a lot of testing.  First the two of us had blood tests done to check for compatibility.  Then there was lots of testing on me.  I should add that at every single step of the way, right up to the point of sedation, I was given an option to back out, and the doctors offered to completely take the heat -- to say that they'd found a physical reason why the transplant couldn't take place.

If you're looking for a completely selfish reason to donate a kidney, the testing is probably it.  I had blood tests, EKGs, ECGs, EEGs, cat scans, MRIs, mental health exams (donating a kidney?  What, are you CRAZY?) and I don't know what all.  All at no charge to me or mine.  It was incredibly reassuring to have official sanction for being healthy as a horse.

For a variety of reasons, living kidney donations are much easier for the recipients than -- they don't say "dead donations" -- than cadaver donations.  One of the big psychological advantages for Chris was that we could put a date on the calendar and plan for it.  Many other potential recipients have to wait around for the telephone call that says, "there's been an accident.  Drop everything and come to the hospital now". Aside from the emotional advantages of knowing when-and-where the donation will happen, live donations seem to have a better likelihood of not being rejected.  Nowadays, there are more live kidney donations than cadaver donations, in fact.

And what about the donor?  A biologist friend explained to me that it's sort of a biological accident that we have two kidneys.  In utero, we have two of everything, but some things (like hearts) fuse along the middle.  Or maybe we have one of everything, and some things (like lungs) split.  I don't actually remember which it is, but the point is, there's only so much space in the middle of us, and kidneys didn't make it to that particular A-list.


Statistics are funny.  My surgeon explained that his hospital had done 500 kidney transplants, and then said "the chance of dying is 1-in-34,000".  (At his hospital, the past mortality rate had actually been 0-in-500; he had to look world-wide to expand the pool to 34,000 people).  He also bragged that kidney donors live LONGER than the average population.  He said this like I was supposed to be shocked or something, but my math professor instincts took over and I just stared at him until he finally added . . . "but of course, that's because they were healthier to begin with."  Yes, an uber-healthy non-smoker who's been screened for a whole host of congenital diseases and who happens to donate a kidney -- that person will live longer than a fast-food-eating, non-exercising smoker who doesn't donate any organs.  Go figure.  Given his cheeriness about fudging the numbers for his own benefit, I was happy to know my pessimistic research had basically said the same thing. 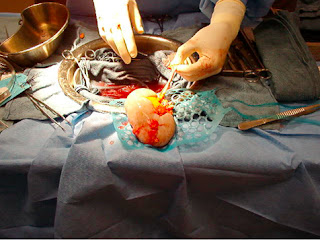 At any rate, the surgery itself was short and sweet.  They made a few tiny holes for their tools, one somewhat larger hole for the kidney.  They pulled the kidney out, dusted off the dog hair that had settled there (just kidding -- but really, doesn't dog hair seem to wind up everywhere?), and popped it into Chris.  Three days later, I was home again.  I was pretty sleepy for a few weeks.  Within a month, I was running my old distance (albeit more slowly), going back into work, and essentially back to normal. 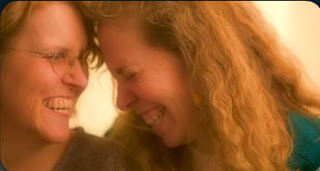 Here's Chris and me, a few months after the surgery.  Because of her, I can finally be in two places at once.  Yes!  Super powers!  And ten years later, we're both doing great.

And a bit of a footnote.  The kidney in the photo above isn't actually mine.  After my own adventure, both my mom and my sister found out that they, too, had coworkers needing kidneys.  And they both shared a kidney of their own -- the photo above is my sisters'.  My mom passed away a few years later from Alzheimers (completely unrelated to kidneys, I'll add), but the rest of us are doing great.
Posted by Miser Mom at 3:18 AM

Email ThisBlogThis!Share to TwitterShare to FacebookShare to Pinterest
Labels: Giving back