This is going to be one of those too-much-information posts for some people.  So I warn you in advance, it's a tad R-rated.   We resume normal family-friendly programming on Thursday.

But even among the female bloggers I've seen, even among the ones who are willing to go so far as to write about getting rid of the refrigerator, or  alternatives to toilet paper, and even among the many women who euphemistically or boldly give three cheers for their menstrual cups, I've not yet seen a discussion of how their frugality around feminine products relates to (ahem) conjugal relations.  If you have prurient interests, read on.

Phase 1:
Let's begin where a woman with 7-going-on-8 children probably has no right to begin:  with birth control.  (Those of you who read carefully have figured out that only one of those 7.5 children of mine was actually born to me, so perhaps it's not so far-fetched a place to start). 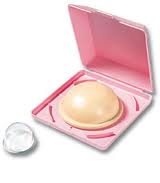 In my wild, impetuous youth, I tried a variety of forms of birth control.  One of the advantages I noticed about using a diaphragm is that -- because I had to leave it in 24 hours -- whenever I used it, I wasn't using other feminine so-called-hygiene products.  In fact, for decades after I no longer needed the diaphragm for birth control reasons, I hung onto it, and used it about once a month, mostly in connection with activities for which I do not need to go into detail here.


Phase 2:
I read about "The Keeper", a menstrual cup, in the Tightwad Gazette.  I was ready, based on my diaphragm experiences, to be a believer.  I bought a cup, and I used it happily for many years.  And for many years, once a month, I would swap it out for my old diaphragm because . . . well, because of R-rated reasons.

Then, one evening, I forgot I had my menstrual cup in, but there were R-rated events anyway.  And  I realized I didn't need to swap anymore.  The "Keeper" was good for running, for swimming, and for athletic activities previously unspecified.  That was sweet!

Phase 3:
Destructo-Dog happened.  If you think it's gross when your dog gets in the trash can and eats used tissues, all I can say is, I can top that story.  Let's just say that I later shelled out some money for an all-new "Diva Cup".  This was a different brand, but the same idea.  All was good.

At which point, sometime within a month's time, we learned a little lesson.  Not all menstrual cups are created equal.  The Diva Cup has little ridges on the outside, to assist in insertion and removal.  This is perhaps a good thing for the woman who is inserting and removing.

The little ridges on the outside, however, can be highly uncomfortable to second parties, or so I have been told.    Back comes the diaphragm.

Phase 4:
The Keeper returns.  That's right.  The woman who won't pay more than $2 for a pair of shoes voluntarily shelled out another 37 of the big bucks for a second menstrual cup.  No more mid-passion swapping of supplies.  There's something about me that rebels at the number of times I've had to say, "Darling, I love you.  Let me go gather my equipment and spend a bit of time alone in the bathroom, and then I'll show you the extent of my passion."  I'd rather just say, "Darling, I love you.  Ha-cha!"

Perhaps the motto of the Keeper cup could be, "keeps you neat and tidy even when you get down and dirty".
Posted by Miser Mom at 3:20 AM