Yesterday, I wrote about our grand home renovation.  For an eco-nut like me, this project seems like a no-brainer:  just insulate the home and save a bunch of fuel.  What's to argue with?  Plus, the place is a lot better looking than it used to be.
I called this project "my Alaskan cruise".  We crunched the numbers and saw that, even though I'd be saving money in the future on fuel costs, the payback time was decades, not years.  But I was so smitten with the project that that factor didn't deter me:  I told anyone who asked (and even many people who didn't) that lots of people plunk down money on cruise trips and never expect to see it back.  To me, this opportunity to improve the energy efficiency of my home was just as much fun as a cruise, and it was going to be with me a lot longer.  The payback time wasn't relevant.

I already wrote yesterday about the up-side of this project.  Well, the down-side of the project is that this renovation was expensive. Really, really expensive. So I'm going back up and give you a vague picture of how we paid for this.

When I began my marriage to my non-miser husband, we took on both a lot of mortgage debt and a lot of other financial obligations.  By 2009, both of these had come more-or-less under control.  The mortgage was close to being paid off; our other financial obligations were subsiding.  Our three girls were in college, but the college bills were mostly taken care of through tuition exchange and through aggressive savings.  I was used to living under a huge debt load, and also to living extremely frugally so that my family could manage that load.  With the mortgage so close to zero, I made the choice to take out a home equity loan to pay for the project.   That is, I decided to go back in debt. By now, I knew we could hack this; I've been living under debt for all of my marriage, after all.

The real problem is not how much the project cost.  The real issue, for us at least, is the way we paid for it -- or more specifically, the way we keep paying for it now.  Because debt means that we're paying for the past.

One way of thinking of this is that our "Alaskan Cruise" translates into two years of my husband's life: the renovation costs just about two full years of his take-home pay.  There have been times in the past when he's wanted to switch jobs or retire early.  But he's still working now to pay for that thing we did two years ago.  He's making career choices today because of something that happened back then, not because of what's in front of him now. 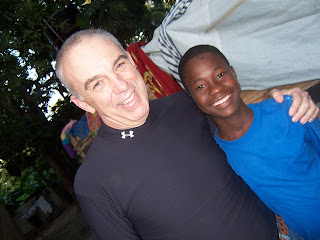 If we had to make the choice over today, there are other things we might choose.  Right now, we're trying to adopt an adorable kid from Haiti.  It's taking an incredible amount of time and energy -- and cash.  We would have started this process six months ago, but we didn't, and one big part of the reason is that we didn't have the money.  Does this six months make a difference?  This boy got typhoid last week -- he's recovering now, thank heavens.  But it's not entirely melodramatic to say that further delay could mean the difference between life and death.  Home vs. health?  The point is, that debt from our renovation meant that we didn't even have the choice.

And to me, that's the really scary thing about debt.  It's not that debt is expensive -- that it costs so much more to pay for those Christmas presents in installments with your credit card than to pay for them up-front with cash.  The price tag is not the thing that wigs me out the most.  To me, the real problem is that you obligate your future self to pay, and keep paying, for things that your past self wanted.  It's one more way that our possessions own us.  Bleah.

Email ThisBlogThis!Share to TwitterShare to FacebookShare to Pinterest
Labels: Things owning us