Over the winter break, I started in earnest on my next t-shirt quilt.  I wrote earlier about a quilt I'd made for my daughter.  Here's a picture of that first quilt; I constructed it out of her parent's t-shirts, trying to follow (more or less) a rainbow pattern.

With that quilt, I obviously didn't worry abut things lining up exactly; it's a bit of a crazy quilt.  The t-shirts themselves are the only "batting", and even so, it's a very heavy quilt.

This next quilt I'm making is going to be a gift for a guy who organized a bunch of college picnics.  (He doesn't read this blog -- if you know who he is, SSHHH!!!!  Don't tell him!).  Because it's a gift and it's intended for display, it's going to be a lot more formal.  I also don't get to pick-and-choose the colors; the t-shirts are going mostly in chronological order.

Here's how I'm starting the new quilt.  This whole process took about 3-4 hours so far (not counting gathering the t-shirts, which is another story).
The next step makes a huge pile of rags -- t-shirts are great cleaning rags!   I cut off any part that had a seam.  I tossed the necks away but kept the rest of the scraps (sounds like cooking a bird!).

After I trimmed each t-shirt, I laid it back on the sheet in the right place.  I folded over the top and the left edges, and I layered them like shingles.

After this I got tired and wanted a break.  The nice thing about this method is I don't need to do any pinning until right before I start sewing.  To pack up the project, I just rolled the sheet up, folded the roll over, and put it all in a pillow case. 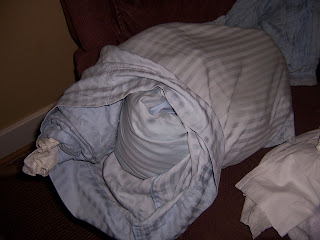 When I unroll it, everything will be in the right place still.

But in fact, as I thought about it, I decided that for this particular quilt, I wanted less overlap than the "shingled" look.  Drat.  More cutting.  I got out a piece of cardboard to use as a stencil.  I double-checked that I wouldn't be cutting off the edges of some of the logos, but also that it would fit on each t-shirt. 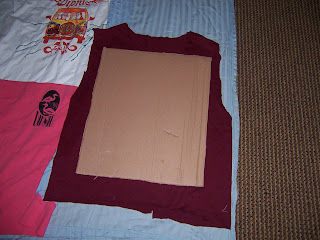 Since pinning things takes a lot of time I didn't want to spend, I got out my favorite heavy dictionary.  The weight held the cardboard in place, and then I trimmed off the excess t-shirt material. 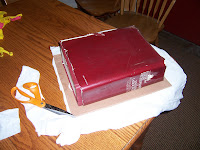 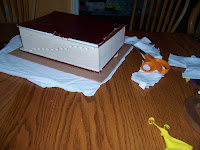 Laying everything out once again, I think this looks a lot nicer.
And that's about how far I've gotten so far.  I didn't show pictures of pinning everything down, but I've done that now.  Sewing comes next!
Posted by Miser Mom at 3:39 AM

Email ThisBlogThis!Share to TwitterShare to FacebookShare to Pinterest
Labels: clothes, using what we have