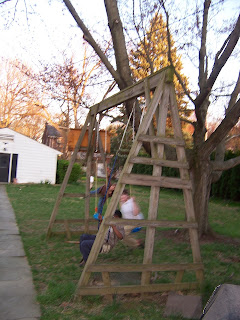 About 40 years ago, one of my neighbors (C.P.) built a large wooden swing set and jungle gym for his daughter.  When she grew older and no longer wanted to play with it, C.P. offered to loan it to a neighbor with small kids until those kids outgrew it.  Thus began the travels of the swing set.  It's been in almost a dozen different yards, from what I can tell.  Here's a picture of it in our yard a few years ago.  As you can see, it's a massive, substantial, and very stable set.  Moving it isn't easy.
I like this idea of temporary ownership -- especially when it comes to kids' things, because they so quickly go through different phases of life.  The swing set was probably in our yard this past time for about 6 or 7 years -- long enough to seem like "forever" to our kids, and long enough to make them sad to see it move along.  But that's a short portion of the swing set's 40-year lifetime of being enjoyed by kids all around our neighborhood. 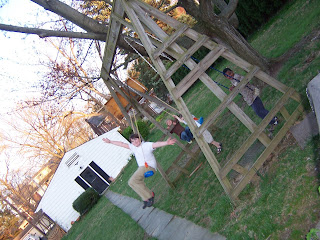 What impresses me the most about this wandering swingset is C.P. himself.  This isn't some store-bought thing; it's something he designed and built himself.  And from the way he monitors its disassembly, moving, and reassembly in each new yard, it's clear he's both proud and protective of the piece.  The rungs of one of the ladders broke when we moved it to my yard (that's why the jungle-gym portion is no longer attached), and I could tell he was a little fretful about that.

And yet, he's willing to share it with others anyway, to relinquish control over his baby when it's in the yard of other people.  That's a kind of selflessness that I admire, and I doubt I could emulate.
Posted by Miser Mom at 3:33 AM

Email ThisBlogThis!Share to TwitterShare to FacebookShare to Pinterest
Labels: community, Giving back