I bet you didn't know that you can fit 24 cinder blocks in a Prius.  The guys at Penn Stone didn't think it could be done; they eyed my little green car and asked, "You sure you want 24?  You gonna make two trips?"

The Prius is mighty.  And with two dozen cinder blocks in it, it's mighty weighty: 9 in the trunk, 13 in the passenger seats, the last 2 riding shotgun.  The little car that could had its tail dragging, but we made it home. 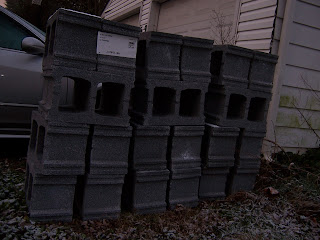 I've been trying to find a good way to store the boys' extensive collection of toys.  After gobs of experimentation, I discovered a way of making storage bins from printer paper boxes, and it's worked well in the sense of helping us keep things neat(er), but it ain't pretty.  Function over form.

I've dithered and waffled over a shelving system to store the boxes.  (The toys go in the boxes; the boxes go on . . . what?  Dunno.)  Finally the Christmas onslaught arrived, and storage needs have suddenly become dire.  The kids and I girded up our loins and went shopping.

First stop:  Habitat ReStore.  Shopping there has multiple advantages: it's cheap; it sells used stuff; it supports a good charity.  Unfortunately, the disadvantages included not having any shelving suitable for paper boxes.

Next stop:  A large office supply store that shall remain nameless.  This had the major disadvantage that I hate (detest/loathe) shopping at chains.  It had the advantage that it, likewise, had no suitable shelving.  We breathed a sigh of relief and reprieve, and left contentedly empty-handed.


[But not quite empty-hearted.  A lovely aside happened in that store when this 19-year-old girl I decided several months ago needed claiming--this kid I call K-daughter--bumped into a friend.  He asked her, "How are you two connected?" and she answered, "She's my honorary mom."  First time she ever said that and I'm still aglow.  Yes.]

Try again: a discount/bargain store.  This had shelves that might sort of work, but they were partly plastic.  Yecch.

I decided that function wins and form be damned.  We're going for cinderblocks and wooden planks.  The shelves will be appropriately teenage-boy-ugly, as befitting FangZ and Waspix and those other nasty plastic creatures.  And ten years from now when the boys move on, the shelving can morph, transformer-like, into other useful poses.

And so I visited our locally owned lumber store, which pointed me to the local stone-scaping supply store, which led me to loading up the Prius almost to bursting.  $45.  Not bad.  We'll assemble the shelves from scraps and odds-and-ends.  We can pretty it up if we need to as we go along.  K-daughter can't wait to paint.  Her h-mother can't wait to help.