I've been having fun learning to can foods over the past two years.  I wrote in a previous post how the "mysterious" part of canning is really just boiling the jars.

I've had so much fun with canning that I've started thinking seriously about pressure-canning, which will allow me to put up low-acid foods (soups and squash, for example).  But a good pressure canner costs several hundred dollars.  So I've been going slow.  And I've been putting out the word, letting people know that this is something I'm thinking about.

Putting out the word is a particularly valuable way to think out loud.  One of my friends pointed me to a nearby Amish store that has a collection of pressure canners.  Some of my more extravagant family members considered splurging on a holiday gift for me. 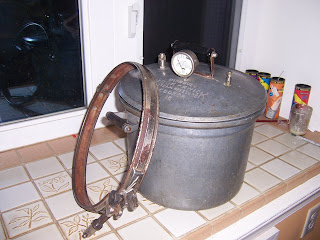 But then I scored big time.  A woman at our church has a beautiful pressure canner, given to her by her mother-in-law 63 years ago.  It's a "Kook-Kwick Steam Pressure Cooker 16", heavy metal piece.  Mrs. Menges figures that somebody gave it to her mother in law, so this pot is at least 100 years old.  What a piece of history!  It's beautiful and solid.  And Mrs. Menges says she'll tell her children that the pressure canner is being stored at my home.

Now, did I mention that I'm going to be looking for a new waffle iron?