Our family has a stack of sturdy, colorful cloth napkins that we purchased about a decade ago; I don't know how much we paid for them, but they're still in great shape.  In return, we don't spend money on the napkins themselves any more.  We don't make runs to the store because we're out of napkins; we don't throw paper napkins into plastic trash bags after each meal.  That's nice.

People who aren't used to cloth napkins assume that they have to be laundered with every meal, which would be a bunch of extra work if it were true. 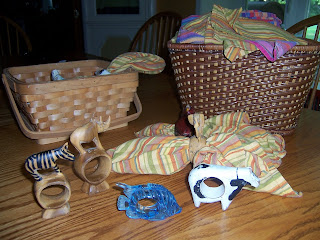 That's where napkin rings come in.  The idea is NOT to get a matching set of napkin rings that make every place setting look identical -- napkin rings aren't supposed to be table jewelry, in spite of what you might see in some restaurants.  Instead, each person in the family has his her own ring.  Our napkin rings, purchased over many years, are wooden animals (this allows me to get new napkin rings that still fit the "theme" even if they don't perfectly match.)  Guests who spend a lot of time at our home can get their own napkin rings, too -- it's become a way of welcoming them into our inner circle.

We wash a napkin when it starts to get visibly dirty -- our boys' napkins get washed a lot more often than their father's napkin, for example.  If you think about how often you throw away a paper napkin that was basically just crumpled or a little wet, you'll see that this gives you a lot of uses between washings.  So for us, the extra work involved is pretty minimal, and it's hard to imagine that the few napkins we wash each week raise our water or energy bill.